C-Girl Akito - To the rescue! 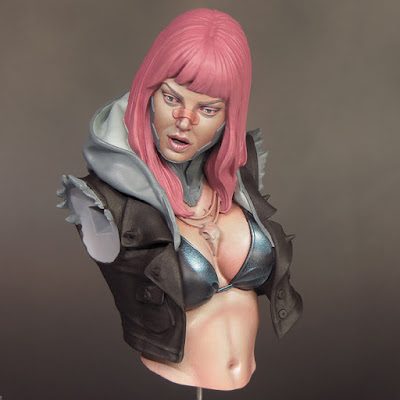 “I can get down to some serious mini painting for myself! I’ve got some exciting projects in the pipeline and I’m looking forward to getting them underway!”
… So much for good intentions!

I’ve had an unusually busy Summer and the only problem I have with it is that I’ve been busy doing things other than mini painting. In itself that’s not a serious problem but, as Summer turns into Autumn, I find myself feeling more than a little frustrated at the lack of painting action and extremely keen to get started.

So I began working on one of my ‘exciting projects’. Without going into detail things did not go well, in fact, they went very, very badly! It’s been many years since I gave up on a project but I think I may well have to with this one. At the moment thinking about it makes me feel pretty miserable; but I’m sure a pause will help me to reflect on my problems with this project and learn some valuable lessons.

In an effort to shake off the painting blues and get my mojo working I decided to switch projects and make some progress on Akito! So far it’s proving to be a successful strategy. I’m making some progress and most importantly enjoying myself. Having previously painted Akito’s face and the majority of the flesh tones it’s high time I blocked in some base colours and began to build the overall colour contrasts.

One advantage of the hiatus this project endured is the extra time I’ve had to consider my plans. I’d decided to create a strong contrast between the pale flesh and a predominantly dark costume. Set against that would have been a highly saturated hair colour graduating from yellow at the roots, through orange into red, and finishing with purple at the tips. This would have been very striking but, on reflection, I’ve decided to paint the hair strawberry pink. There are two reasons for this. I think the more saturated colours would be too bright and draw attention away from the rest of the bust. I also feel that the saturated colours would be too aggressive for the mood I want to give the piece. The weapon and costume are already fairly edgy and aggressive, so I’ve decided to contrast that with a soft, and admittedly slightly stereotypical, girly pink colour for the hair.

The choice of pink was inspired by a conversation during my workshop in Hull and a little online research has provided plenty of useful reference material. I was a little nervous when I came to paint the base layer for the hair as pink, much like red, can be a tricky colour to work with. It will be useful to have the base colour to hand when I come to shade and highlight the hair but the mix was fairly complicated, so my chances of exactly recreating it later in the project are slim. Therefore I decided to mix up a batch of paint in a dropper bottle. Thankfully I nailed the mix first time and got the exact shade (strawberry ice cream) that I wanted! My mix consists of Khorne Red, Flayed One Flesh, Karak Stone and Rakarth Flesh. 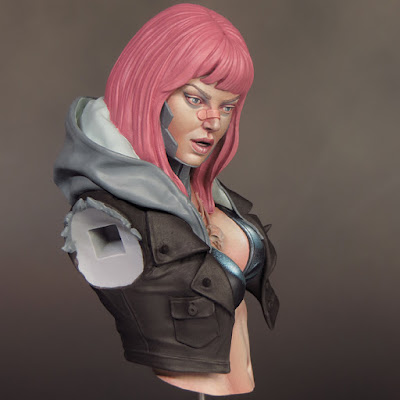 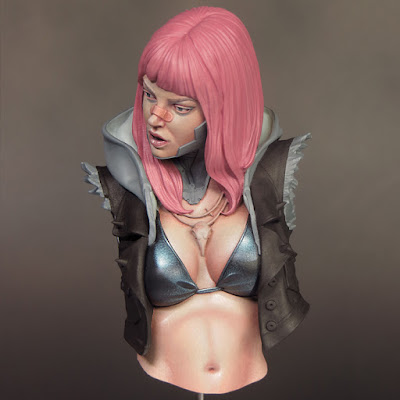 Once the base colours were blocked in I turned my attention to the bikini top. I’d decided to paint this as a synthetic neoprene type of material but a conversation during my Stockport workshop (there’s a trend developing here) helped me to refine my plans. Rather than the soft ‘rubbery’ sheen I had intended I decided to paint a high gloss, almost metallic, shine to the material. A little online research provided some good examples and suggested that I used an ultra fine stipple technique to replicate the texture of the shiny fabric. I’ve painted this in a cool blue/black that will contrast with the warm brown/black I plan to use on the jacket.

Although these are only base colours and in need of a great deal more work, this stage of the project has moved things on considerably. I now have a more highly developed vision of how I’m going to paint Akito and the bust itself looks a lot more completed. It’s been fiddly work but well worth the effort.