Last weekend saw my fourth trip up to London for Salute and to be honest it rather crept up on me! The main focus of my efforts for the last year and a half has been ‘Project Nurgle’ for the Golden Demons. I was a bit caught out by the announcement that the Golden Demons would fall in May this year. I had anticipated that the Demons would be held in the Autumn and had to adjust my plans.

I’d intended to paint a fantasy character miniature for Salute but doing that would have put a lot of pressure on the, now shorter, ‘Project Nurgle’ time scale. So I shifted all my attention to getting ready for the ‘Demons’.

I decided some time ago that I would hold Gutrot Spume back for a ‘grand debut’, alongside the Plaguebearers, at the Demons. That left me with a choice between Commodore Borgossa and Abalam for Salute.

There was much dithering on my part as only one entry is allowed per category but, with a little help from my painting friends, I decided it had to be Borgossa.

I entered Borgossa into the largescale category, which includes busts, and then spent the rest of the day browsing the stands and chatting. The chance to meet up with other painters is always one of the chief highlights of these events. As is usual for Salute the day went astonishingly quickly and, before I’d had time to get around all the stands, the competition results were announced! 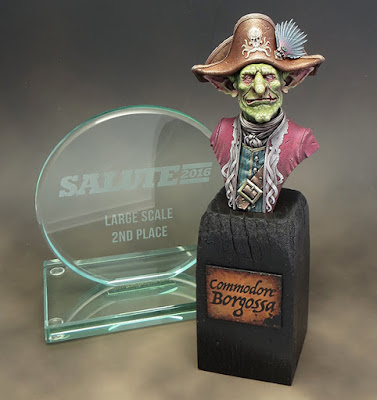 Borgossa took the second place in his category! That rewarded my efforts over the last year to gain experience of painting larger scale minis and busts.

One of the judges was Peter Bell and he was kind enough to give me some useful feedback on Borgossa, which I hope I can incorporate into subsequent projects. In short, the overall paintjob on Borgossa was let down by the maroon jacket which didn’t match up to the texture work on the other areas.

It’s a bit of a relief that it was the jacket. I felt that there was something lacking but I’d not been able to pin down what the problem was!

Hindsight is all well and good but I need to sharpen my instincts, and hopefully, I will do so as I gain more experience painting larger scale pieces.
Posted by David Soper 2 comments:

My first idea for the standard bearer was to use an ordinary Plaguebearer but, after a little consideration, I decided that I wanted the mini to stand out from the ‘regular’ troops. It felt appropriate to give the standard bearer stature, somewhere between a regular Plaguebearer and my champion. To achieve this I’ve based my conversion on a Herald of Nurgle miniature.

The conversion work was fairly straightforward. I swapped the head for that of a regular Plaguebearer and removed the branch-like growths from the spine. To be honest, I didn’t care for either the head or the growths and, in addition, felt that they would clash with the overall look of my unit. I’ve used a small piece from my ‘spare’ Gutrot Spume to form the basis of a hump on the standard bearer’s back. I like the pose of the Herald miniature and, in particular the pointing arm with it’s sagging, torn flesh. I’ve drilled a few extra holes into the sagging flesh on the arm to make it look even more ‘filigree’. 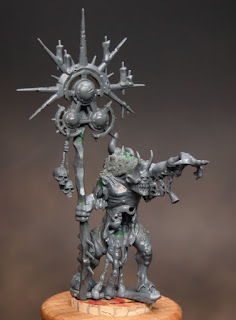 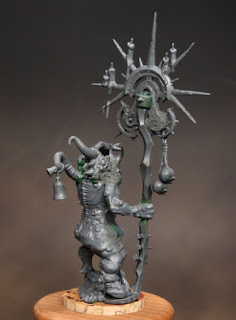 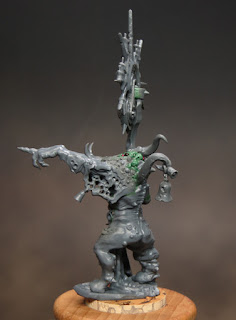 The most dramatic change is, of course, the replacement of the weapon with a standard. I decided on an icon of Nurgle for my standard and based it on the icon from the standard in the Putrid Blightkings kit. This was a good start but I wanted to create more impact, so I added the starburst crest from the Lord Relictor’s standard out of the Age of Sigmar Starter set – HERESY! The addition of a few nicks and dents helped to blend the starburst in.

With the conversion work done it was time to add a little texture by the addition of baking soda. Then the mini was ready for it’s base coat. This time I went back to using Rackarth flesh! 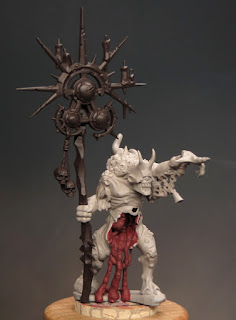 For the next stage I used glazes to build up the flesh tones and define the main blocks of colour. I also began to define the overall light and shade. Now I can work on refining the definition and detail. 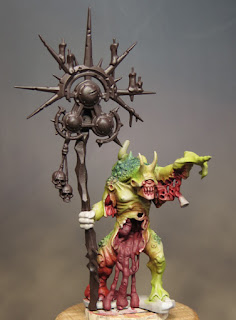 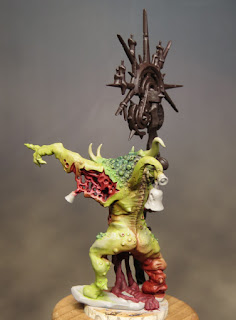 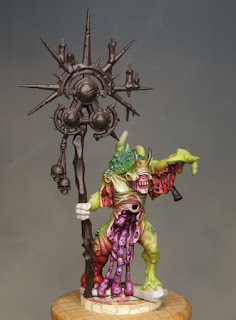 And there we have it, the Plaguebearer champion is finished! Once the severed heads were painted it was a matter of adding the finishing touches to pull everything together. In addition to a little dripping green slime, I added some blood dripping from a few of the wounds. 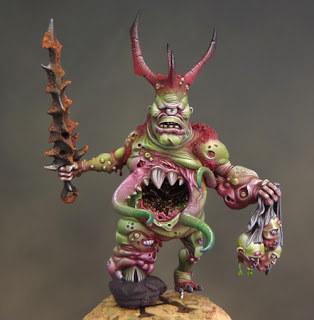 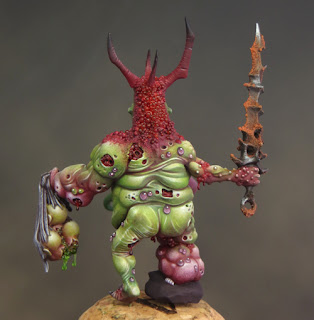 It’s very important to keep the blood drips as small as possible. This is mostly to ensure that they look ‘in scale’ but it also prevents them from becoming too cartoonish in appearance. To convey the impression that the slime is thicker than the blood, I’ve made those drips slightly larger. As always it’s all about creating contrasts! 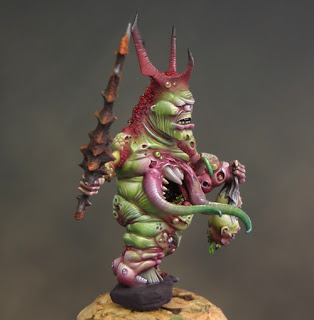 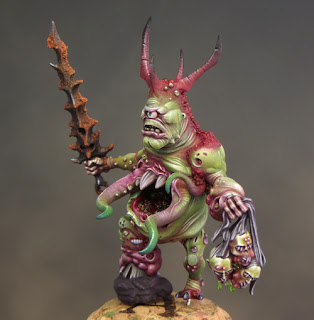 I’ve used some microbeads to enhance the blood and slime but, further to that, I’ve used them to create additional areas of texture. This is most apparent on the back of the neck. The microbeads are mixed with a little tinted water effects, which gives a glossy finish. Once this has dried, I’ve then washed over the microbeads with diluted paint and ink. By doing this I am able to control the degree of gloss/satin/matt on the microbeads and better integrate them with the rest of the painted miniature. 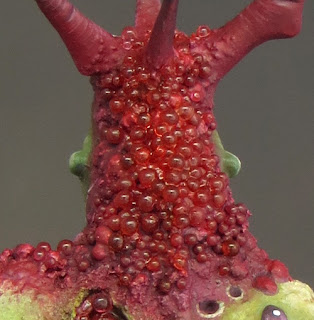 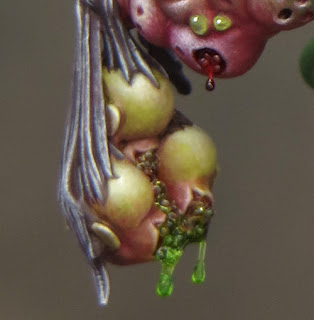 I now have one miniature left to convert and paint for my unit, the standard bearer. But I’m also giving a lot of thought about the base for the finished unit. My recent bout of ill health may have some impact on this as my initial plans were to have the unit on a fairly elaborate scenic base. While I would still like to try this, I will need to see what time I have left once the standard bearer is complete and develop my plans appropriately. Past lessons learned also come to mind. A simple basing solution is not necessarily less effective than a complex one, and whatever I do, the miniatures must be the main focus!
Posted by David Soper 3 comments: