As I said in my first posting for ‘Project Nurgle’, I’d been quietly pondering the idea of painting a Nurgle themed mini for a while. When Games Workshop previewed Gutrot Spume, and the Putrid Blightkings, at Warhammer Fest, they had me hooked and reeled me in right there and then!

It’s almost always like that for me. I may have the germ of an idea for a project but seeing a mini I want to paint is the thing that sparks things off. Further to the mini itself, Games Workshop’s background info on Gutrot fuelled my imagination and gave me the idea of creating a nautical theme for this project.

With Gutrot Spume now finished, and at such a key point in the project, it’s no bad thing to reflect on it’s origins before I move on to the next stage. 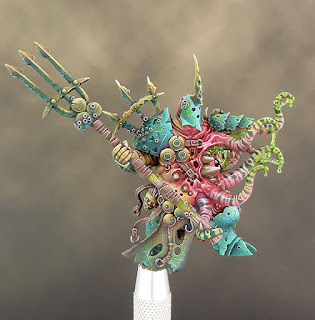 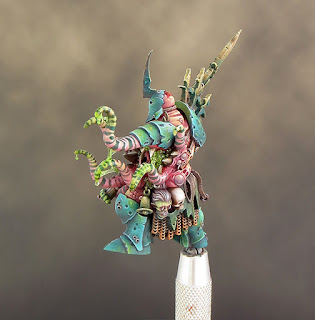 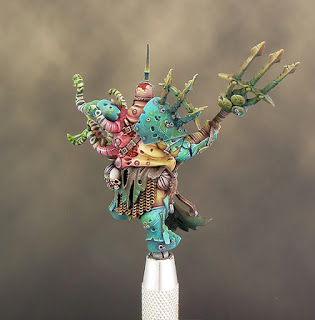 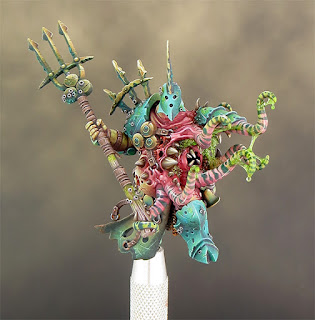 I set myself specific goals for every project I undertake. They are a useful way of pushing myself to try new things, and to develop and refine my skills; but they shouldn’t be taken too seriously. First and foremost mini painting is my hobby and it’s meant to be an enjoyable pastime not a task. Secondly a project can often develop in unexpected ways and the goals should never hold back creativity.

My goals for ‘Project Nurgle were as follows:


Broadly speaking I’d say ‘so far so good’! The use of colour is crucial to achieving all of my goals, so it’s vital to develop the right colour palette for this project. From the onset I knew that green would be a key colour – it is Nurgle we’re talking about and you can stretch things only so far! Red was a likely choice for a contrasting colour and not inappropriate bearing in mind all those sores and diseased wounds. I also felt that with a nautical theme blues and blue/greens would feature in the palette.

So far so good but just picking a few likely colours isn’t enough. Those colour will have to work together to good effect providing both harmony and contrast as required. The colour in the shadows and highlights must be considered at an early stage in order to create a cohesive palette. All in all there was an awful lot to bear in mind as I wanted to create a complex and colourful palette; and, to be honest, I was having some difficulty getting my head around this in the early stages of the project.

The solution came, as it so often does, when I wasn’t directly looking for it. I always put together a folder of reference images and it was while I was looking up octopus pictures (for tentacle reference) that I discovered my colour palette.

The picture below became my inspiration for the overall balance between the red and blue/green shades. My aim was not to copy exactly but rather use the image as a starting point in developing my own colour scheme. It was particularly influential in my decision to use a light turquoise/blue as the base colour for the armour and then to shade it with deep greens.

The colour palette helps to reinforce the ‘nautical Nurgle’ style but the addition of a few customised details really help to sell the idea. I wanted the conversion work to be fairly minimal as I liked the mini but, I thought swapping the axe for a trident made a strong statement. This together with the addition of some barnacles, I think, really helps to sell the nautical theme. The base will be the single most nautical part of the project and is likely to make or break the piece.
I’m really looking forward to completing the base for Gutrot! The boat, water and tentacles will provide some interesting painting challenges and I think it’s going to be a lot of fun. The future looks likely to feature lots of texture and water effects and I’m almost certain that Nurglings are going to get in on the action at some point too!
Posted by David Soper 5 comments:

It’s been a bit of an odd week for painting! When I fixed Gutrot’s trident in place the project seemed to move a lot closer to completion but, since then, painting has been a hard slog and it feels like I’m making no progress. It’s just one of those phases all painters seem to go through; and I know it will pass – probably when the weather cools down!

However, in spite of the slow pace, I’m pleased with how the paint job is developing on the trident. As a key element of the mini, and the focus of the conversion work, it merits having some time and attention spent on it. 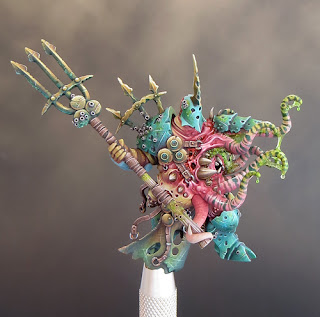 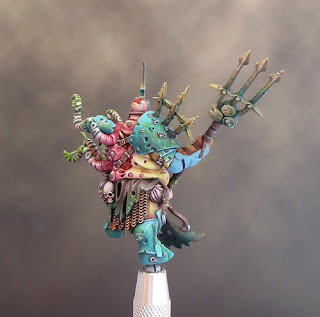 I recently took a trip to Nottingham for the Golden Demon Winners’ Day at the recently refurbished Warhammer World. I had to miss out on the day last year, so I was especially pleased to be able to make it this time. 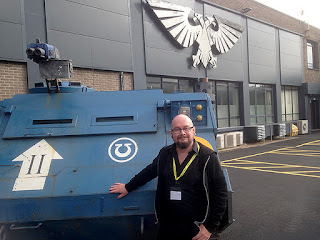 As we’d been invited to bring along any work in progress we were happy to show Gutrot also made the trip. He was a bit of a revelation to some as my limited photography skills had somewhat misrepresented his colour. He is, in fact, both greener and darker than he looks in my pics and it was reassuring to get some positive feedback about this. The general feeling was that the darker colours look more appropriately ‘Nurglish’ than in the photos.

I also decided to bring my Nurgle Predator from 1990. I thought it might be a novelty to be able to directly compare Slayer Sword winners from so many years apart. My Predator hasn’t been seen ‘in the flesh’ by anyone for at least 25 years so it was nice to get it out of the cupboard.

I still don't think it's up to today's sword winning standard but I was pleasantly surprised by how good my old Predator looked in the company of the current GD winners. The idea of revisiting the concept and creating an up-to-date version of the Predator has a lot of appeal to me. For one thing, it would give me the opportunity to incorporate some sculpting into a project, which is something I've neglected since I came back to mini painting.

The opportunity to take a good long look at the winning minis was a real treat! When viewed close up and in good light, it becomes clear why they were picked. Even the best photography can’t fully convey the subtlety and skill on display, and I was honoured to find my minis included in such company! 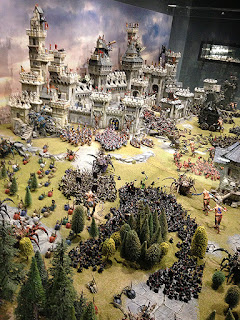 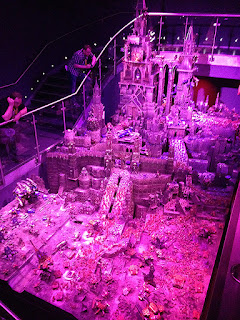 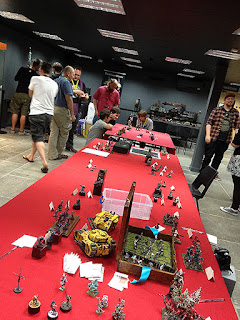 Which brings me to Warhammer World where everyone can see examples of beautifully painted minis for themselves. I’m not going to write a full review but, I will say, that I was genuinely impressed.

The exhibition halls are packed with painted minis and some truly stunning dioramas. The dioramas are massive and manage to balance an incredible amount of detail against the overall composition. I could have easily spent longer studying the dioramas but my favourite part of the display was at the very beginning where the oldest minis were. Many of the minis on display here were familiar to me from the pages of White Dwarf and took me back to my formative years in the mid eighties. It was quite a powerful experience to finally see these minis ‘in the flesh’!

My personal highlight of the day was meeting John Blanch. I was familiar with John’s work as an illustrator before I was ever aware that he had any connection with Citadel miniatures and Games Workshop. John’s painted miniatures opened my eyes to the possibilities of a more ‘artistic’ approach to the hobby and an awareness that painting a miniature need not simply be a matter of filling in the colours in the correct areas. It was a very important lesson to learn in my early years and helped set me on the path to becoming a better painter.
Posted by David Soper 1 comment: