It feels very good to get back to some painting after the upheaval of Dad’s death and funeral. I’d like to say that everything is back to normal but of course nothing will be quite the same again and it will take time to figure out what the new normal is.


I left Zarbag just as his paint job began to come together but also as I came across my first problem: my palette of colours for Zarbag was the same as for my Troggoth. This made good sense as they are going on the same base and exist in the same environment. The difference is in the proportions of those colours. On my Troggoth the reds, greens and grey/blacks are secondary colours to the flesh tones but on Zarbag they are dominant. The highlight and shade colours are common to both minis.

The problem occurred with the red. On the Troggoth I used P3 Skorne Red in the flesh tones and it brings a lot of warmth and life to an otherwise cool and desaturated palette. Skorne Red is a great shade but the formulation has a soft shine when dry. This was fine on my Troggoth but on Zarbag’s robes it looked horrible! First of all it was too shiny for fabric but even worse the shine meant that it was difficult to see the blending while I was painting. This resulted in a slightly patchy and uneven finish.

The solution came in the form of AK Interactive Ultra Matte Varnish. So far this stuff has worked like magic for me! One thinly applied coat and the surface takes on a beautifully even ultra matt finish. I was then able to retouch my painting on the hood using Scale Colour paints to refine the highlights and shading to my satisfaction.


The hands and feet were fiddly but otherwise straightforward as I was working with the same flesh tones that I’d used on the face. Although Zarbag’s flesh looks, naturally enough, predominantly green, the shadows are a warm red/brown. This gives added depth and nuance to his flesh but it also helps to tie him together with the Troggoth. In addition I’ve glazed some subtle blue tones onto the yellow/green flesh. This helps to create a range of warm and cool greens.

The other main area of note is Zarbag’s sickle, which deserved special attention. I decided to use true metallics for the blade, as the shine of the metal would create an interesting material contrast with the other surfaces. In addition, the verdigris effects I planned to use look especially good against true metallics. I painted the blade with a warm coppery gold and then worked up to a yellow gold mid-tone and then to a cooler silvery gold highlight. I then used some Citadel Colour Contrast Paints to glaze over the blade. The Contrast Paints tied everything together and softened the shine.


The verdigris is the fun bit! Using a very dilute blue/green, I applied blobs and spots of colour to the blade. Before that was fully dry I removed the paint with a clean wet brush. This will leave stains and tide marks where the edges of the paint started to dry. I repeated this process several times with varying blue/green shades. I then glazed over the verdigris with a dark green to soften the effect. 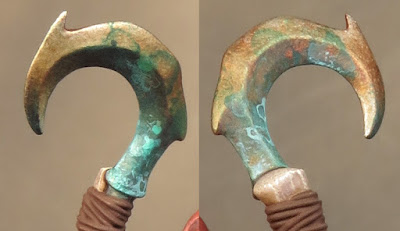 I repeated a similar process with dark brown on Zarbag’s red robes to create some unpleasant looking stains which were further enhanced with the addition of some brown texture paint. This was created with a mix of paint, chinchilla sand and matt varnish.

Zarbag is such a small mini that I’ve been able to finish him with in a few days. All together I painted him in about a week although that’s been split up and spread out over time. 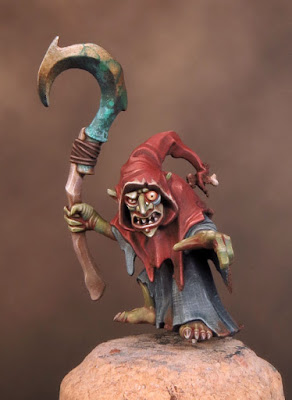 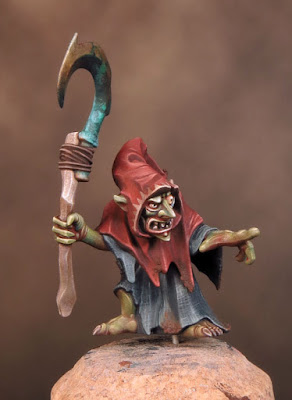 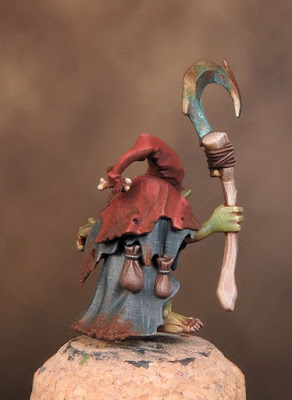 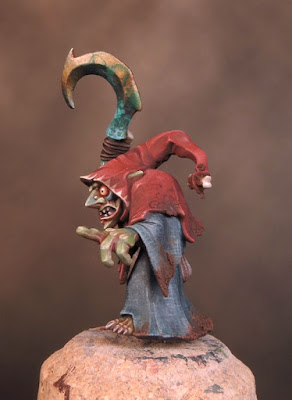 With Zarbag done I could then turn my attention to the base but, before I started painting, I had to get the back and side surfaces flush and seamless. Although not complicated it was a frustrating task. I’d used a mixture of materials to build the base including plaster, plastic, MDF and Milliput. The varying degrees of hardness meant that even when sanded flush the boundaries between the different materials could be seen and felt. The solution was to prime the base and then gently wet sand the seams - multiple times! A seamless surface can be created this way but it’s frustrating because I had to keep checking my work in different lighting to be sure I was successful. 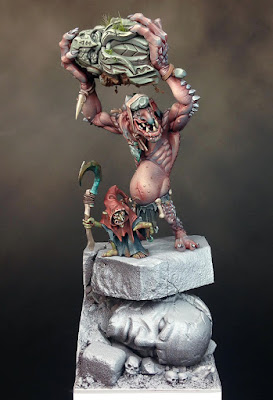 With the base as well finished as I am ever going to get it (there is no such thing as perfection) it was time to test fit my models onto it. This would be the first time I’d been able to put the two models together in the context they are intended for. With a little fiddling the composition came together exactly as I wanted. This is a great relief as it means I can move on to painting the base with a degree of confidence that the overall project will come together well!

Family and friends came together yesterday at Test Valley Crematorium to remember Dad. He was taken from us by circumstances that were tragic and sudden. It was my honour to be able to pay tribute to Dad as a part of the service held in his memory. I would like to share my words and a few pictures of Dad on this blog. 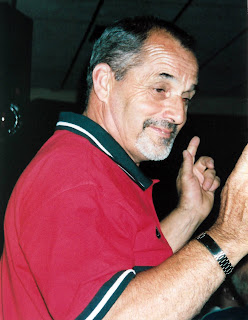 Dad’s death was an overwhelming shock and, for a time, it drove out all other thoughts and feelings. But as I’ve prepared for today I’ve been able to reflect on my memories of Dad and that’s helped me to put his death in its proper place in relation to his life.

Some of my memories of Dad may seem a little random, and maybe even inconsequential but they’re all precious; and anyway that’s how memories work. I’d like to share a just a handful of them with you.


I remember Dad’s penknife. Always in his pocket and ready when needed. I remembered the snap as it cut through the twine on a hay bale. But it was much more than a work tool used on the farm. On Sunday mornings dad would take my brother Richard and I up the lane to visit Nan Soper. As we walked he would fill his pockets with Hazelnuts picked fresh from the hedgerows. With a twist of his knife the shells were opened and the nuts shared as we walked along.

On those same walks he’d casually chop the tops off the giant hogweed as we went along. Penknife held at arms length, never missing and (almost) always managing the feat with a single practiced stroke.

That penknife would help build our incredible dens, slice an apple or carve and shape a walking stick. In memory it seemes like an inseparable part of Dad.

Dad had a soft spot for chimpanzees. Not so much the real animals as presented by the likes of Sir David Attenborough but rather the comedy kind and most especially Cheeta. The real star of the Tarzan movies from the 1930s and 40s.

I have vague memories of a rubber chimp mask that Dad put to good use when playing pranks. But I most clearly remember watching ‘Tarzan's New York Adventure’ with dad when I was small, and our shared delight in Cheetas antics. Dad was a connoisseur of mischief and Cheeta was at the top of his list!

In more recent years when ever looking for a birthday or Father’s day card I always knew I couldn’t go wrong with a comedy chimp.

Time passed and as I reached my teens my relationship with dad became more complicated. I was moving towards a very different world and life than the one Dad knew and we sometimes clashed.

Most of my style choices caused him no little concern but it was the pink mohawk in 1983 that finally pushed him over the edge. I will just say that, for all the embarrassment I undoubtedly caused him, he was more than able to even the score. That sense of mischief meant that, one way or another, he could always get the better of me!

College followed school and the time eventually came for me to leave home and make my own way in the world. That was a tricky transition and it was certainly an emotional one. But I’ll never forget that it was Dad who calmed the stormy waters and helped me take my first steps into the adult world.

I already had much to be grateful for but life was to blessed me with so much more. It gave me the opportunity to know Dad as one adult to another. I got to see him grow happier and more contented as he moved through his life. I’ve been given the time to understand his views and values and to realize that, naturally enough, we have much in common.

I learned (eventually)to take delight in his humour, to admire his once embarrassing sense of mischief and his strength of character! He showed me how being comfortable enough with yourself to sometimes act foolishly does not make you a fool – quite the opposite! 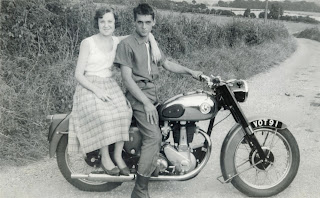 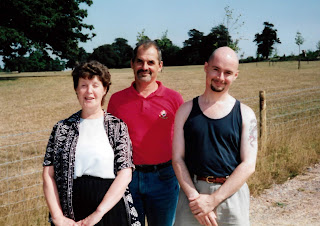 We never said ‘I love you’ to one another! Do I regret that – not in the least! Because the years we had gave us the opportunity to know and understand each other Father and Son. I was able to say ‘thank you’ and to show my love for him. And to recognize the love in all his actions. From the least little hazelnut to the long hours of hard work that supported me through my education.

Dad was taken away too suddenly and too soon but I am forever grateful for the man who was my farther and for all the years I had with him.
Posted by David Soper 7 comments: