And just when everything was going so well!

I've had a dodgy shoulder since I injured it in the gym seventeen years ago (believe it or not I used to be a fitness freak with a six pack & pecks). Last week it went again and my Doctor thinks I've torn the ligaments. Now I'm waiting for physopherapy and a scan.

Fingers crossed I seem to be recovering much faster than last time and have regained a fair bit of movement in my arm. My shoulder has improved at such a remarkable speed it makes me feel like a fraud, but I'm not complaining. I had a week where I couldn't paint and that was quite enough!

I thought I'd take the opportunity to catch up on my postings so here are some pics of the first two plaguebearers to be completed. I'd made a good start on number three before my shoulder stopped me from painting and there are a couple more at the early prep stage. I need to sort out a hero, musician and standard bearer but my ideas are coming together so they are (sort of) in hand. I've a few bits & bobs on order for the base and a good supply of heather roots picked up in Cyprus this summer so my plans for a corrupted forest setting are also coming together.

I'm very pleased with how these are turning out but I've been painting Nurgle minis for a year now and the novelty is wearing a bit thin! I've decided to take a bit of a break from the plague bearers before I become sick of the sight of them. I'm going to work on something completely different for a while (although it will be green). Then I can return to 'project nurgle' with renewed enthusiasm. 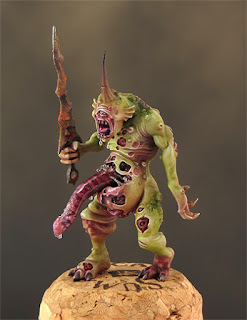 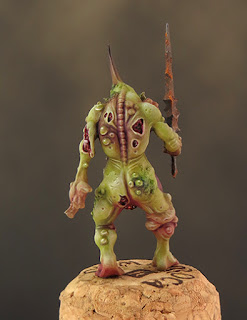 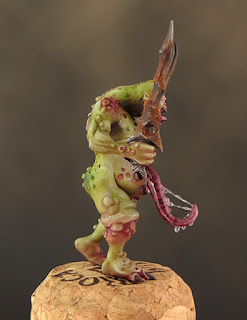 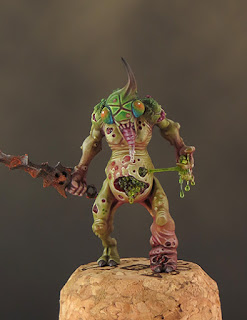 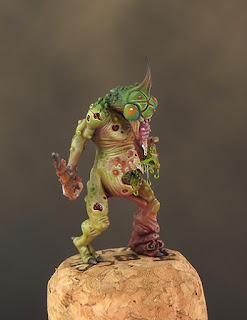 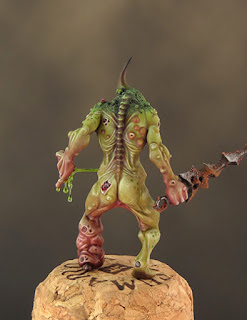 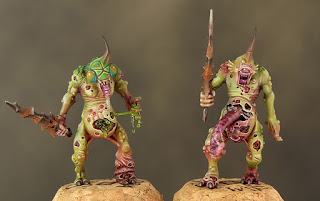 Teaching Texture and Monster Flesh at the Weekend Workshop

The Cardiff area saw an unexplained spike in purchases of baking powder, Uhu glue and micobeads last weekend! To tell the truth, I might have had something to do with that! 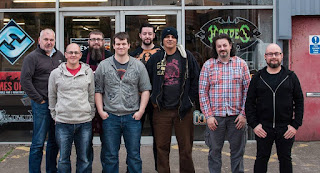 The time I’d spent preparing my plaguebearers for last weekend’s workshop on monster flesh proved to be time well spent. The first time I picked up by brush to start demonstrating I realised that I had never painted in front of any-one else ever before! It was an extremely odd sensation, but all my years of painting experience and my preparation quickly kicked in and we were off! 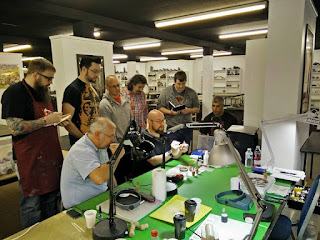 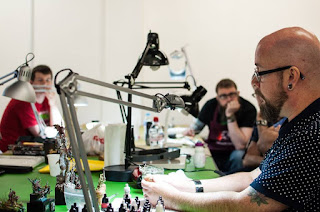 Over the course of two days we explored ways of creating texture first by adding physical texture to a mini, then painted texture and finally to finishing touches that enhance the overall effect. This was done within the context of a light to dark painting technique where we shaded down from a light base coat with successive glazing. This style of painting is particularly good for skin tones as it utilizes the translucent qualities of acrylics and ink to represent the similarly translucent qualities of skin.

To support these techniques I also discussed some basic colour theory and demonstrated how I apply this to my own paint schemes. Contrast was a constant theme and we looked at how to exploit the differences between light/dark, warm/cool, saturated/desaturated, gloss/matt and rough/smooth to add drama and interest to our minis. 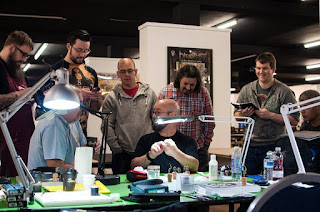 The two day format meant that there was plenty of time for everyone to get stuck in and make some progress on their own plaguebearers. It was great to see every one-working their minis up from the initial stages to where they were able to try out the more detailed texturing and finishing touches. At times the silence of concentrated painting was broken only by the occasional blast of a hairdryer or a request for more baking soda! I dread to think what a casual observer would have thought about the packet of suspicious white powder being passed around the group!

On the second day I demonstrated some slime and corrosion effects that can be used to give a mini an extra finishing touch and, by the end of the day, weapons were crusty and plaguebearers were oozing!
Posted by David Soper 3 comments: