I love that feeling of having just finished a project! It's high time too as, although very busy and achieving plenty, I've not actually finished very much this year! But the Abyssal Warlord is now done and I'm very happy with the result. 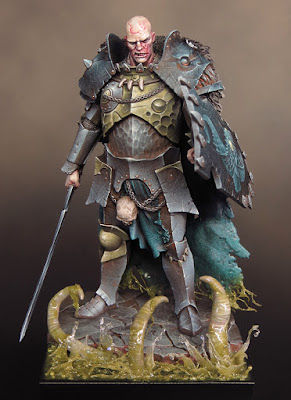 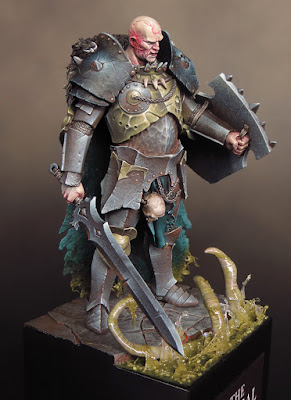 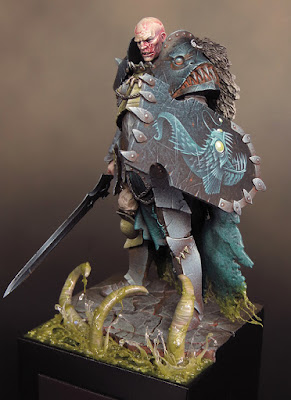 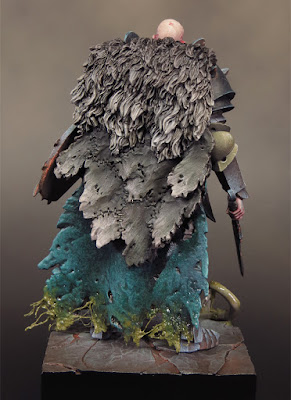 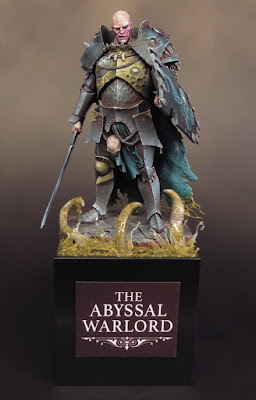 This model feels like a consolidation of the techniques I've been experimenting with over the last year or so: the tentacles and weedy slime are a clear call back to Gutrot Spume and the textured NMM, like the use of the black tones, is something I’ve been working on over several projects.

I’ve felt for some time that I develop as a painter by having periods of experimentation followed by periods of consolidation. This probably means it's time to stretch myself and try something new. So it’s a good thing my next project will be finishing the Akito bust!

I’ll be posting a step-by-step guide on how to create the splash effect shortly. Although it looks similar to the effect I used on Gutrot it was not achieved in the same way, and I think it’s well worth sharing. 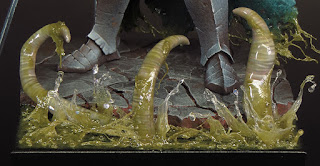 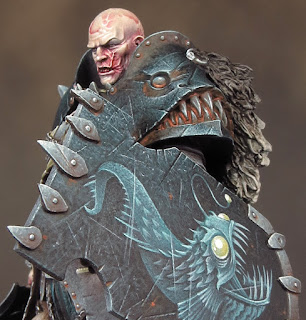 If I’m not very careful to take regular breaks during my painting sessions I’m prone to a fair degree of shoulder pain on account of an old injury. So I make a point of taking time away from my models to move about and stretch. This has proven to be an effective solution and I can happily paint away with no trouble. Until I started painting the Abyssal Warlord that is!

What I didn’t take into account was that, as a white metal kit, the Warlord weighs a lot more than a plastic or resin model. My regular stretch breaks were not adequate and as a result I’ve had to endure a month and a half of shoulder pain. The lesson I’ve learned is to treat each model individually and pace myself accordingly. I’ve been able to carry on painting but only by restricting myself too much shorter painting sessions with this model. The weight also makes the Warlord awkward to handle as he’s very top heavy and painting him became a bit of a chore!

That’s a shame because in all other respects I think he’s a great model to paint and I’ve been very happy with how my paint job is developing. So I persevered and, once the cloak was attached making him even heavier, I was finally able to work on the sword and shield. This came as a great relief because I’d decided to paint these as sub assemblies so there were no more weight/balance issues. 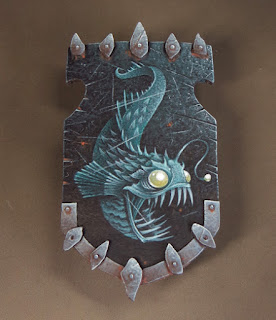 The shield was something I’d been looking forward to. As a large flat surface it provided the perfect opportunity to paint a freehand design. This is something I’ve been itching to have a go at for some time. I’d considered doing it for my Farseer but, somehow, it didn’t feel right on him. Similarly I was going to paint an elaborate freehand on the Megaboss but decided to do something more appropriately Orky instead.

My choice of design was fairly straightforward. I wanted to develop the abyssal, deep sea, theme already featured on this model. So something fishy seemed appropriate especially because of the fish head motif on his armour. For the same reason, an anglerfish seemed like the best choice and so I searched online for suitable reference. Although there were plenty of photos to choose from what I found most useful in the end were tattoo designs. These had already undergone a process of stylisation which made them more appropriate to my needs. No single design was exactly right but I was able to take inspiration from a couple and combine them into something I liked.

My final anglerfish design incorporates an ‘S’ curve in it’s body with the head at the bottom. I had initially thought to have the head at the top but I found it more pleasing to sit the head in the curve of the shield’s lower edge. To tie it in with the overall scheme, I’ve painted the fish in the same blue as the cloak and the loincloth. The eyes have been picked out with the yellow/green tone that I used for the gold.

I was surprised at how quick it was to paint the fish. Starting off with a few guidelines, pencilled in white onto the black background, I gradually built up the design from a fairly rough start. As the design developed I resolved the form and contrast until I was happy with the result. The fish design became increasingly spiky, as this felt appropriate to the feel of the model. 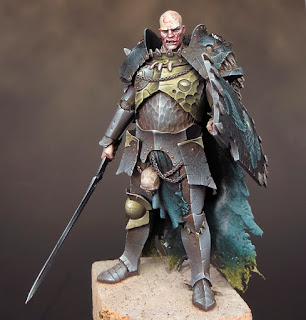 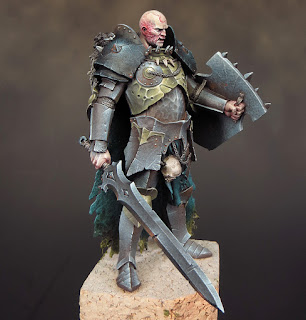 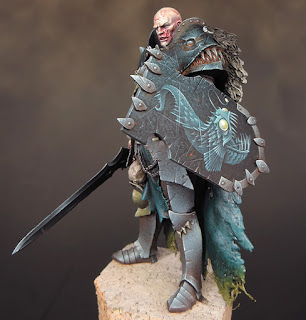 With the sword and shield now glued in position there are just a few finishing touches to paint and then the Warlord will be ready for basing. With that end in sight I’ve started work on a base creating a hard cracked surface by gluing very thin sheets of milliput onto cork. The cracks are created by pressing through the brittle milliput into the flexible cork with a metal tool. 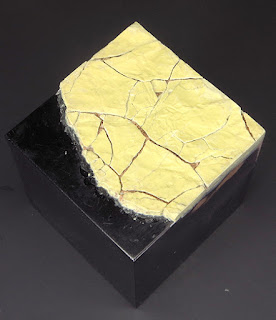 I’m now in the final stages of this project and very much enjoying the process of bringing it all together. And my shoulder is feeling much better too!
Posted by David Soper 4 comments:

Where are the pictures?

You may well have noticed the sudden disappearance of the pictures from all postings over a year old on this blog. This is down to a change in my picture hosting arrangements and I’ll be taking steps to fix the problem. That will, however, be a very big job so please bear with me as it’s going to take a while. I will sort the pictures in my most popular postings ASAP and then work back through the archive as time allows.

On a positive note all postings from the last year and all future postings are, and will remain, unaffected.

Thank you, in advance, for your patience!
Posted by David Soper 8 comments:

My trip to Copenhagen last April presented me with a few miniature related issues that needed to be sorted out. First of all I had to fix the damage that Gutrot sustained in transit. All in all that went better than I dared hope. Secondly I needed to find a replacement for bicarbonate of soda as a texture medium. This particular quest is on-going; but I’ve concluded that I need to resort to a range of different materials to achieve the effects that the bicarb made possible. Finally I had to rethink the transport solution for my miniatures, particularly with regard to flying and airport security.

I wanted the type of miniature case that comes with a sliding tray. I could then bolt my models to the tray when the occasion demanded. The case had to be strong, lightweight and small enough to take on board a plane as hand luggage. I was lucky enough to get an excellent recommendation. I was chatting to Mally Anderson at this year’s Salute and he showed me the transport case he’d had made for his brilliant Glottkin .

His case came from Sphere Products and Mally advised me to go to their stand so I took myself over to have a chat with Jon Page. It quickly became apparent that Jon was able to provide exactly what I needed. Sphere produce several ‘standard’ sizes of transit case but are also able to make them to individual requirements. In addition to that there are options for trays, handles and clear panels.

It was a great weight off my mind to have found a solution so easily but it’s been a busy year and it took me a while to take further action. I finally got round to contacting Jon with my requirements last week. I’ve gone for quite a small case at 300 x 200 x 190mm but I know that size will safely fit under the seat in front of me in a plane and accommodate most of my minis. I also opted for a strap handle as this would lay flat and have a lower profile. In addition I was able to request a tray position that would allow for minis to be bolted in from below and a clear Perspex door and back panel. This is a particularly useful feature in my opinion as it enables me to monitor my minis in transit. Airport security staff will also be able to clearly see the contents of this ‘strange’ box and, hopefully, they will then feel no need to tip and shake the box in order to assess it! I also opted to have my logo etched on the door as I think that’s a nice finishing touch.

Jon came back to me with a drawing of my transit case for approval and after a slight tweak to the tray height I was happy. From my initial enquiry to delivery of the finished case took just a week and I’m impressed at how speedy the process was!

The case arrived flat packed and with all the necessary tools and fixings. I’ve a history of rushing flat pack projects, and regretting my haste later, so I made sure to take all due time and care assembling the case. Most important was putting the parts together in the correct order but all in all assembly was very straightforward. 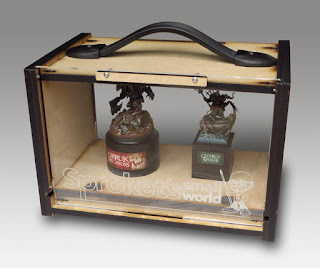 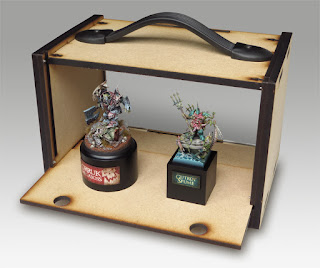 The finished result is a transit case that meets all my requirements. I’m delighted with the quality product and service I’ve received from Sphere.  I’ve already decided to get another, larger case for transporting minis to my workshops.