Sculpting a head for my Nurgle Demon Engine

As I said in my last post I toyed with the idea of using the heads from the plastic Great Unclean One on my new demon Engine. To be honest this was down to a lack of confidence in my sculpting abilities. A triple headed demon was not without some merit, but it was never going to be the solution for this project. Deep down I always knew I was going to have to sculpt a head if I wanted to stay true to the spirit of the 1990 tank! Trying out three heads also made it very clear to me that the new head needed to be much larger than those from the plastic kit. On my old tank the head was formed from the gun turret and I definitely wanted a new head of similar size and bulk. 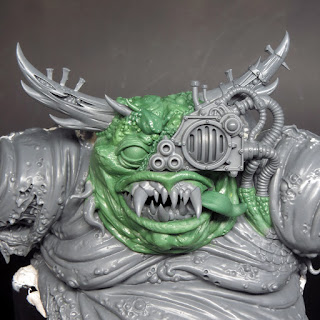 I’ve not really sculpted anything since I started painting minis again in 2010. But in the years immediately prior I’d begun to explore sculpting in some depth. In fact it was my venture into sculpting that led me back to mini painting. I got into customizing Dr Who Action Figures and rapidly became dissatisfied with simply chopping and swapping various parts. Over time I developed some limited sculpting skills and familiarized myself with the materials and techniques. 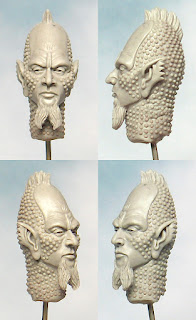 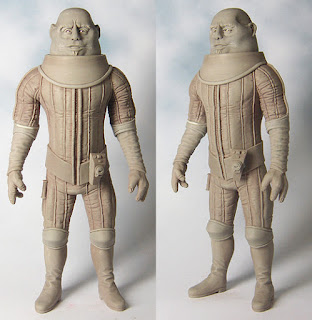 My venture into sculpting enabled me to make my own figures but as I was sculpting ‘action’ figures their poses were very stiff and static. The examples above show how far I had come and in time I might have further developed but one thing led to another and mini painting reclaimed my full attention.

So there I was having decided to resurrect my sculpting skills and feeling more than a little daunted. At that point it struck me that I really had nothing to lose. If it all went wrong I could bin it and start again and in the worst case I could explore the triple headed option. My inhibitions had been born of a fear of failure but I now felt perfectly happy to give it a go!

I now had to decide what I was going to sculpt the head out of. This decision is complicated for me as I’m very allergic to most epoxy putties. My three main options were:

I ‘d gravitated towards this polymer clay as the default for my action figure sculpts. It remains workable until baked but, even then, it can be added to and re-baked. In addition, I’m not allergic to polymer clay.

The great advantage of milliput is that once set it can be easily sanded, carved and drilled. It responds very well when mixed with water and can blend seamlessly with other materials. Unfortunately milliput triggers my allergy, and if it touches my bare skin, I will blister in a few hours.

This is very soft and sticky when first mixed and as it sets it becomes firm but flexible. It never becomes totally hard and can be tricky to sand or carve. Greenstuff can also prove difficult to blend into other materials. If I handle greenstuff with due caution I suffer only minimal effects at worse.

I would have liked to use Super Sculpey but because I would be incorporating elements from plastic kits into the head this ceased to be an option. Plastic kits and hot ovens do not mix! Therefore I decided to use Greenstuff to sculpt the head. Greenstuff has the added advantage of being good for creating soft fleshy textures and organic forms.

I’ve found it best to work in stages allowing each stage to firm up before I work on top of it. This prevents the problem of overworking the forms and flattening out the volumes. It also provides a stable surface to work on. There is nothing worse than perfecting one side of something only to find that you have also pushed out and distorted the opposite side! 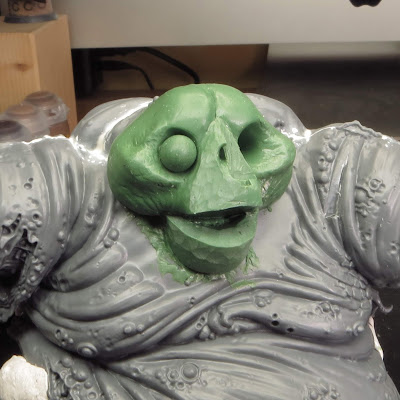 To begin this process I needed an armature to support my sculpting. In this case the best armature for my head would be more than a little like a skull. This gave me a solid foundation to work on and provided an underlying structure for the muscles and flesh. The face was then built up in several stages incorporating the plastic elements as it developed. 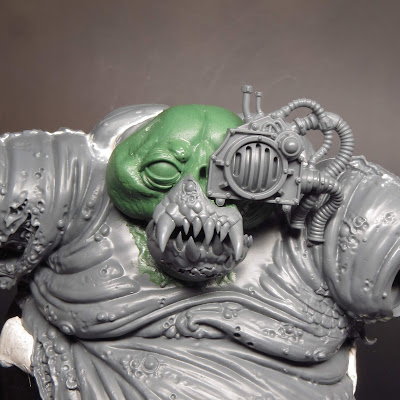 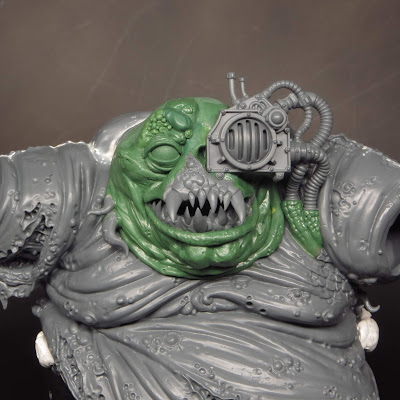 At times I needed to sand the Greenstuff and this can be a problem. As it remains slightly soft and flexible Greenstuff can sometimes go rough, or even tear along its edges, when sanded. I’ve found that wet sanding almost always overcomes these problems. I use a waterproof (silicon carbide) sandpaper and gently work down from P320 to P2000. This also works well for sanding resin and plastic. 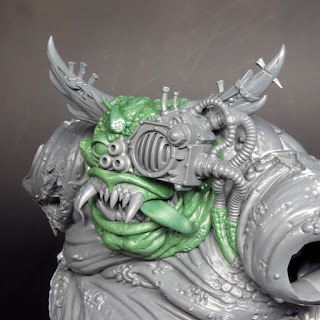 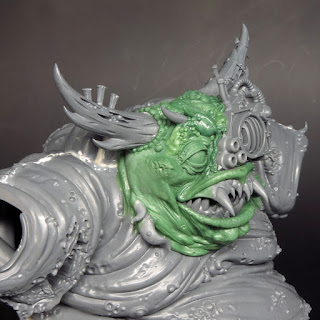 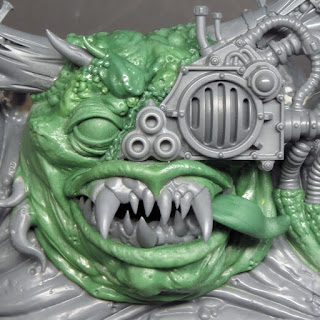