Chee-Chee Part 12 - Painting The base

My painting style is for the most part very tightly controlled and that can be both good and bad. You need to know when to relax and let the paint do it's thing. Painting a bases is often the time to do exactly that so I've been pushing paint around and having a lot of fun in the process.

I've been dirtying up Chee-Chee's base and to do that I've employed washes, glazes, dry brushing, stippling, splattering and sponging. It's all been very satisfying and I'm beginning to get a pleasing depth and richness to the textures by layering all these effects. 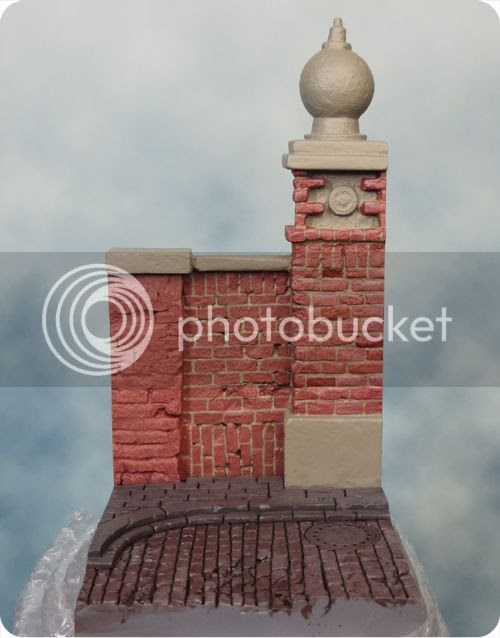 Email ThisBlogThis!Share to TwitterShare to FacebookShare to Pinterest
Labels: Chee-Chee, Work in progress

Chee-Chee Part 11a - Getting messy all over again!

I've had a lot of feedback about the blood effect on cool mini and as a result I've had a rethink about how to tackle it.
To that purpose I've removed most of the old blood (that was fun!) and reworked the effect. I may add a bit more gore to the arm (I think it can take it) but I'll give it some thought as I don't want the gore to dominate the mini. 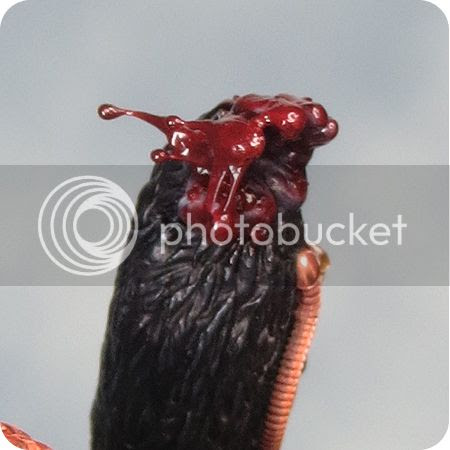 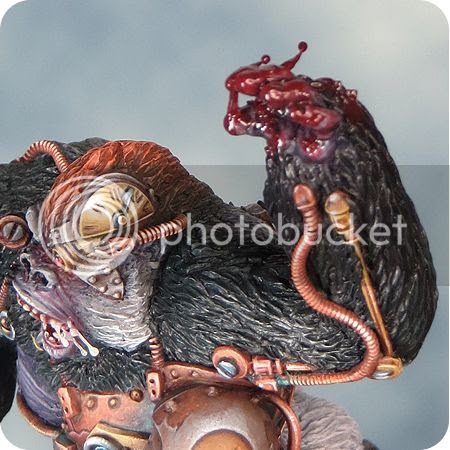 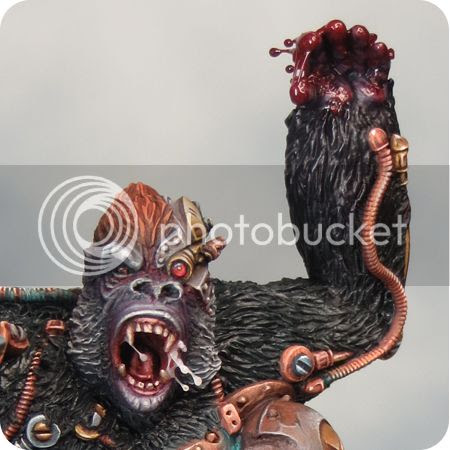 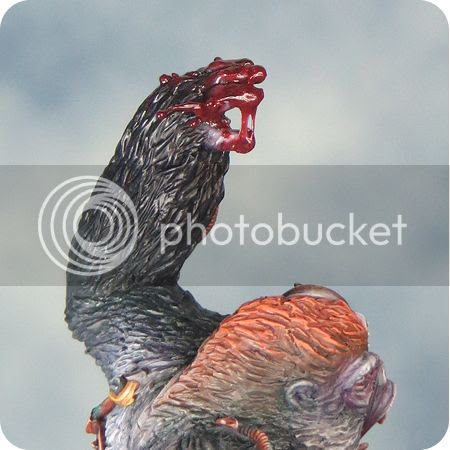 I've also started to paint the base. It's all too clean looking at the moment but that will change.

Some painting projects call for taste and subtlety but I'm probably on safe ground when I say that a giant, mutant, cyborg gorilla isn't one of them!

I've always intended to add a few extra gruesom touches to Chee-Chee once the painting was done but I wasn't sure how far to go. Right from when I first saw the mini I've seen Chee-Cee as being in a rabid fury quite literally tearing his victims apart. I've decided to go all the way with my initial ideas and turn the horror right up. 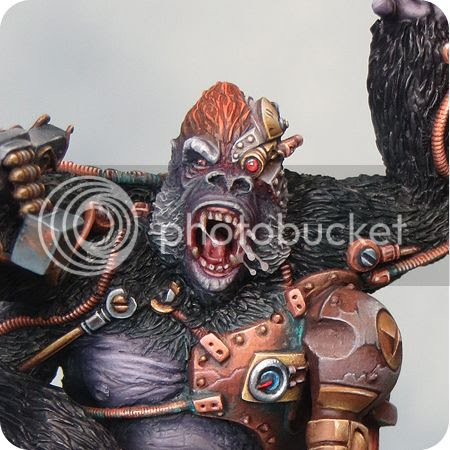 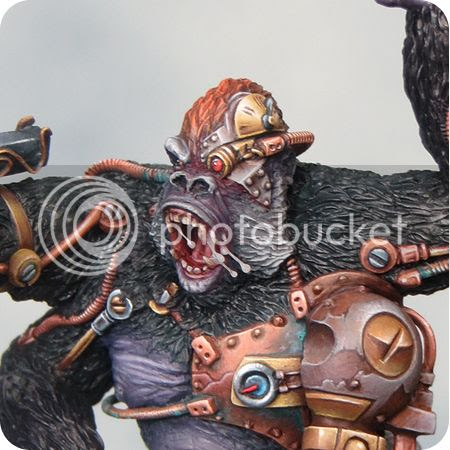 I've used a similar method to how the one I used for the slime on my Hellion's whip to add drool to Chee-Chee's mouth.

I cut each hair to size and glued it in place with a dot of PVA wood glue. That's the really fiddly bit!
I then built up the drool with a 50/50 mix of GW and vallejo water effects mixed with a dot of ivory paint. It's just a matter of taking your time to build up the layers and letting each one dry before you add the next.

I wanted Chee-Chee to be bloody handed and I decided to go for full on gore with a meaty bloody mess clinging to his fingers. Once again this method makes good use of water effects but this time I've also used UHU glue. I mixed the glue up with some blood coloured paint and then stretched out the resultant gloopy mess and let it set up a little. I pulled off small pieces and stretched them out further. This gave me translucent rubbery lumps and strips that I could combine with my blood mix to build up the gore. 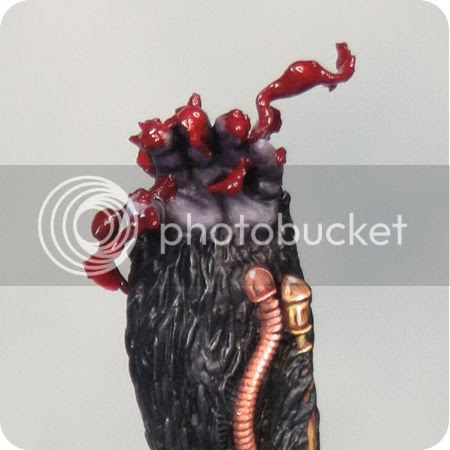 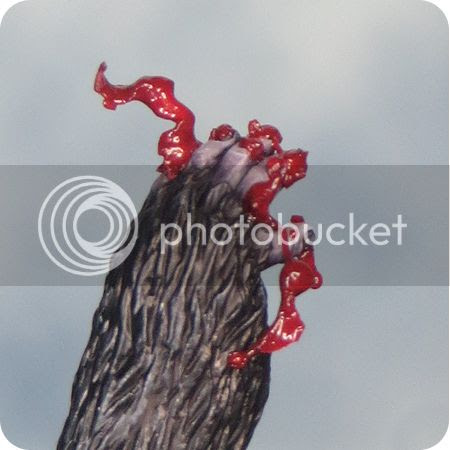 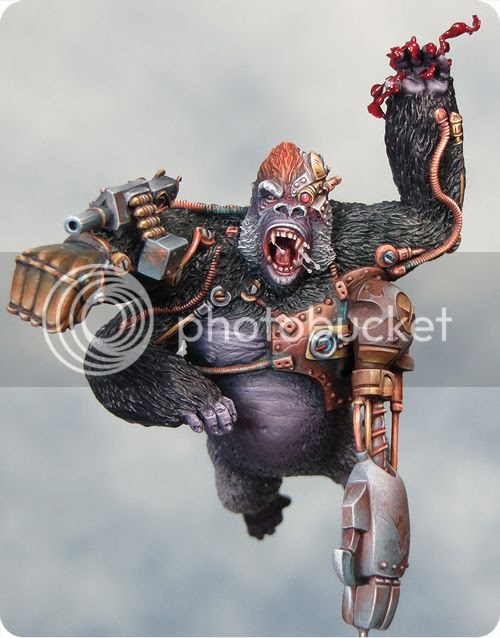 Well this is a very nice surprise!
My Dark Eldar came second in the Painted Sci-Fi category of the Wamp Awards 2013. To be honest I hadn't realised that I was a finalist untill quite late in the day and when I saw the other finalists in the painted Sci-Fi category I really didn't fancy my chances at all!

Congratulations to all the winners.

Check out all the results of the WAMP Awards 2013, here.
Posted by David Soper 1 comment:

The past week has seen some positive painting action and as a result I've managed to achieve significant progress on Chee-Chee. I've continued to make some (admittedly subtle) tweaks to the details but the major development has been in painting the fur. I've now pretty much finished the bulk of the painting with little more than some adjustment and refining of the details left to do. Of course the minute I declare Chee-Chee finished I'll spot (or have pointed out to me) something that needs attention but at least the end is in sight. Then I can turn my attention to painting the plinth. Photographing Chee-Chee has made me very aware of how much of a difference the angle of view make to a minis appearance. This is something I'm going to have to consider very carefully when it comes to gluing Chee-Chee onto the plinth. I want to get the most interesting and dynamic composition out of the mini that I can. 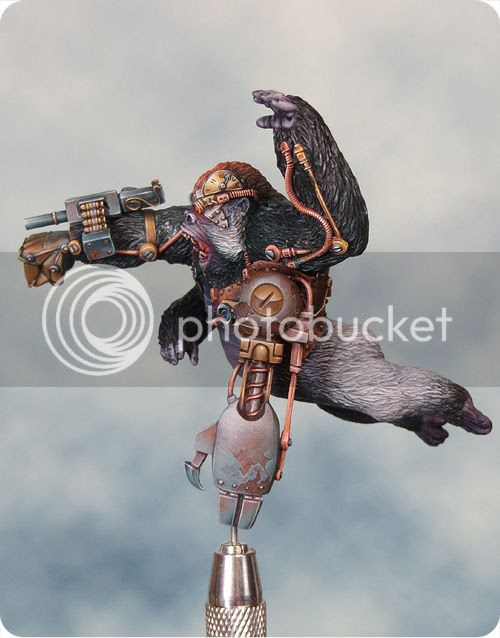 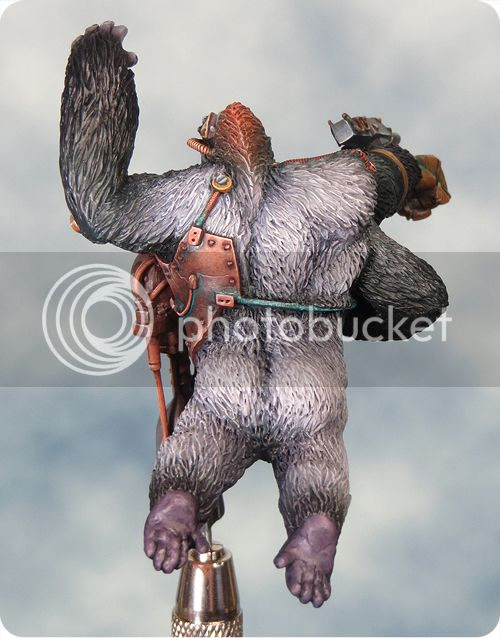 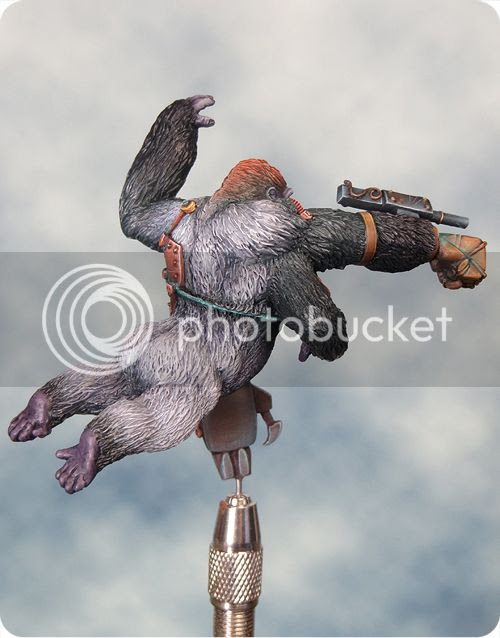 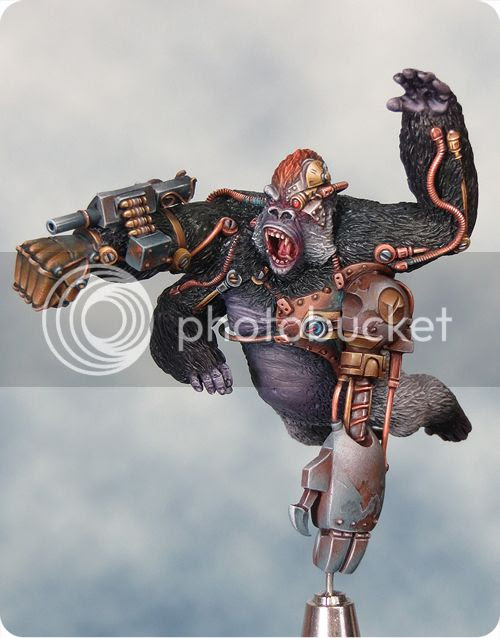 Chee-Chee Part 9 - With a little help from my friends!

I've had some really useful feedback on Chee-Chee and his base over at Platoon Britannica so I spent my weekend painting time making a few tweaks and adjustments. 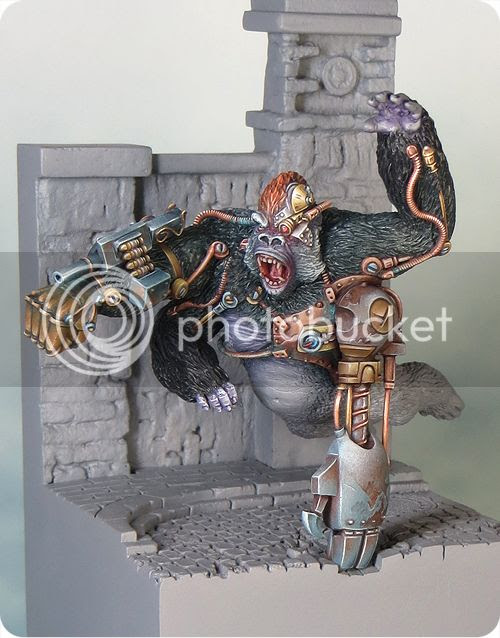 The first thing I did was to rework the dip in the cobblestones. I had one of those nagging feelings that it wasn't 100% there but couldn't put my finger on what felt wrong. It's now clear (after it's been pointed out to me) that the dip was just too smooth and soft looking so that the overal effect was like a matress being pressed down. Rather than reworking all of the cobbles I've cut out a few along the leading edge and second rank. I then glued then back with small wedges of plasticard underneath to raise them up. I think the result is both more realistic and pleasing to the eye. 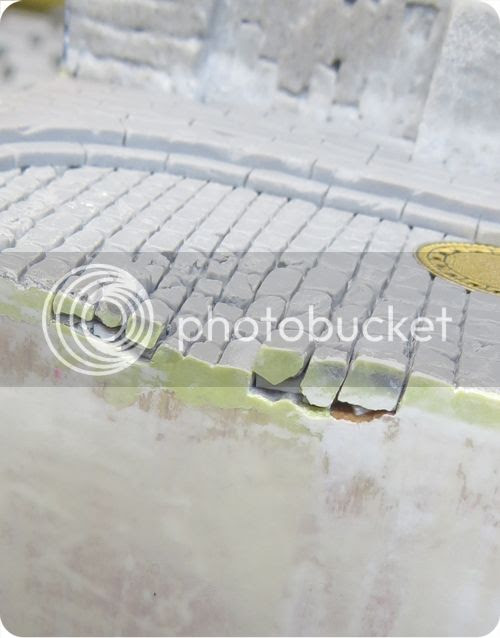 Once that was sorted I went ahead and put some primer onto the base as it was time to get a proper look at the finished surfaces. 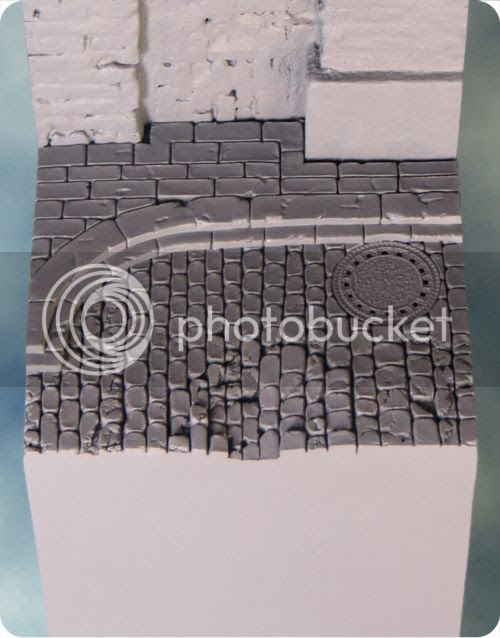 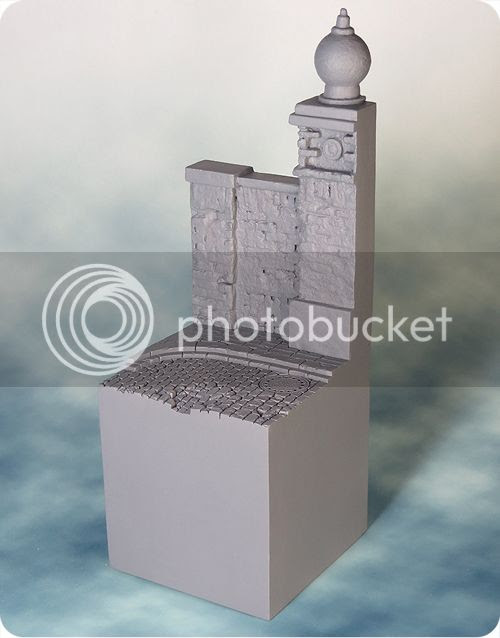 I've also spent a bit of time refining the paint work on Chee-Chee. There's nothing too dramatic going on here. I've worked up some of the detail on the pipework  and work some more red into the face. The face was (as usual) the first part of Chee-Chee I painted and it was starting to look a bit dull in comparisome to the rest of the mini as the overal scheme came together. I might well put a little more work into the face to make it 'pop' as the mini comes to completion. 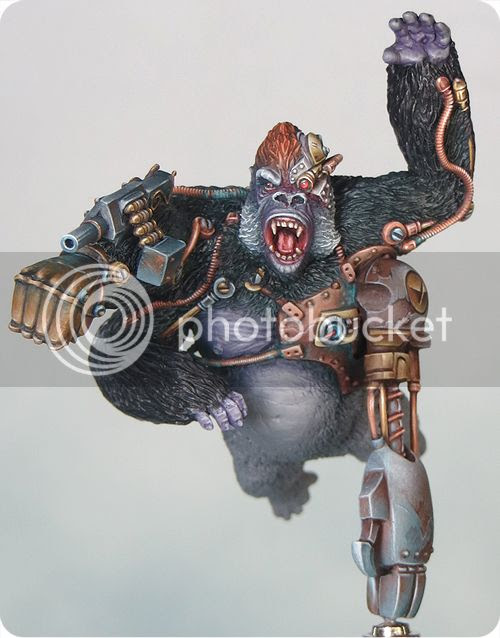 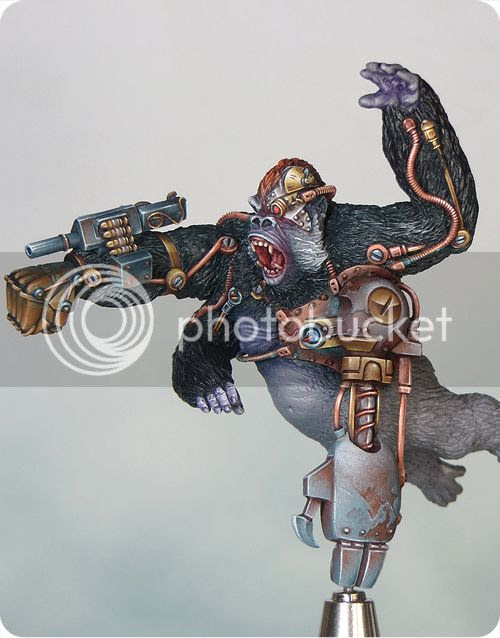 Chee-Chee Part 8 - Assembling the base. 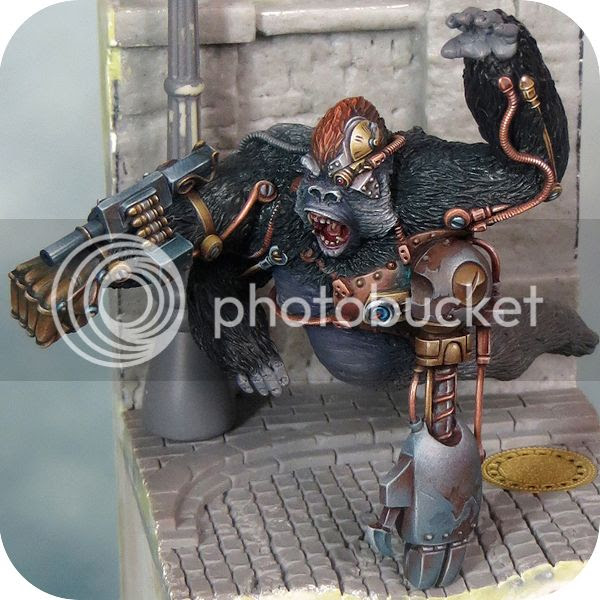 There's nothing too complicated involved in assembling Chee-Chee's base but the trick was always going to be achieving a seamless finish. To make life a little simpler I cut a back plate from 2mm plasticard. This helped to hide a multitude of sins and gave me a stable foundation for the wall. I popped the polymer clay cobblestones off of the wooden cube and carved out an indent where Chee-Chee's fist makes contact with the ground. I then used Extra thick superglue to fix the elements together making sure the cobblestones were pressed down into the indentation. Next I set the base aside so the glue could set overnight

The next day I used milliput to fill in all the gaps and seams and left it to set (once again overnight). Then came the start of what turned into a Christmas sanding marathon. First I used flat files and then increasingly fine grades of emery paper to level off the surfaces. Even after sanding there were a lot of little dinks and dents and the wooden cube would required a lot of work to get the smooth seamless surfaces I wanted.

To help achieve this I've used Mr. Dissolved Putty. This is a thick liquid putty that can be painted on with a brush and, once dry, sanded to a smooth finish. I've never used this product before but I'm now really impressed with it. I built up a few solid coats on the wooden plinth and spot applied over the dinks and dents. Sanding needs a light touch but results in a very pleasing satin smooth finish. The only drawback is that the putty dries slightly translucent so it can be tricky to see the surface clearly. 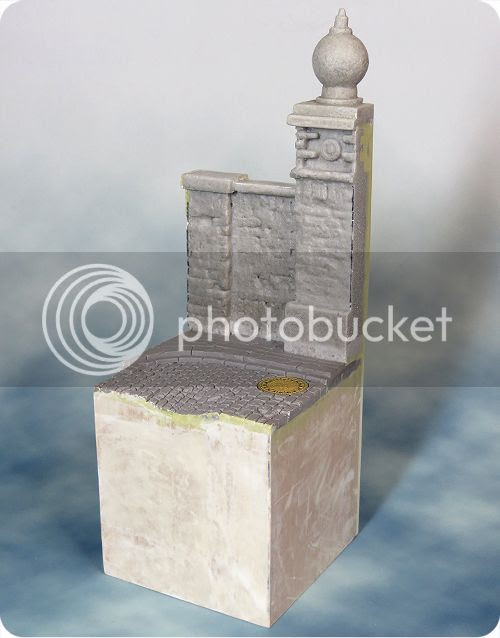 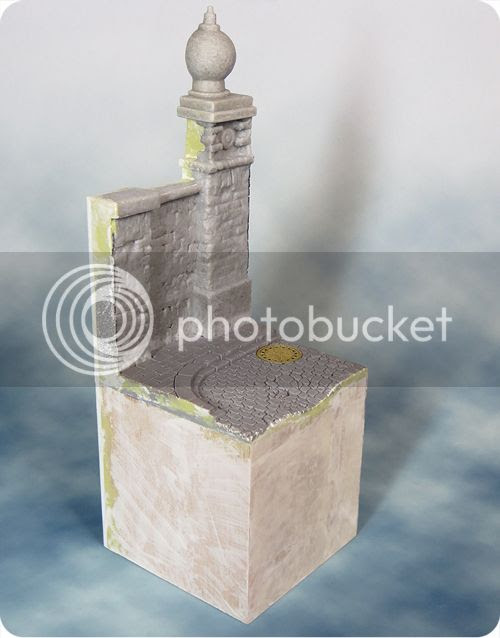 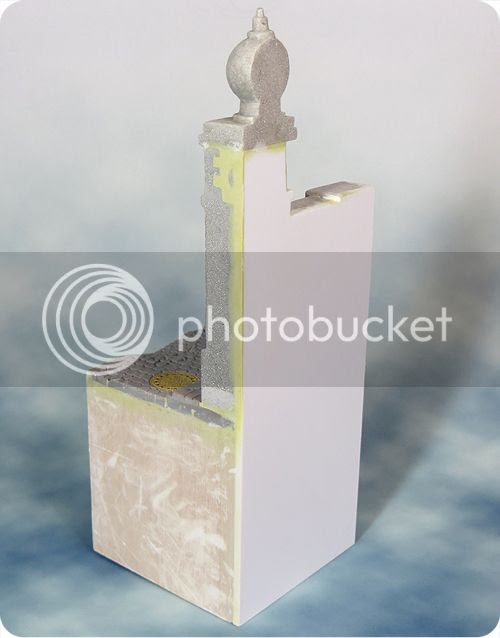 With the base assembled it was time to drill the holes for pinning Chee-Chee and the lampost in position. 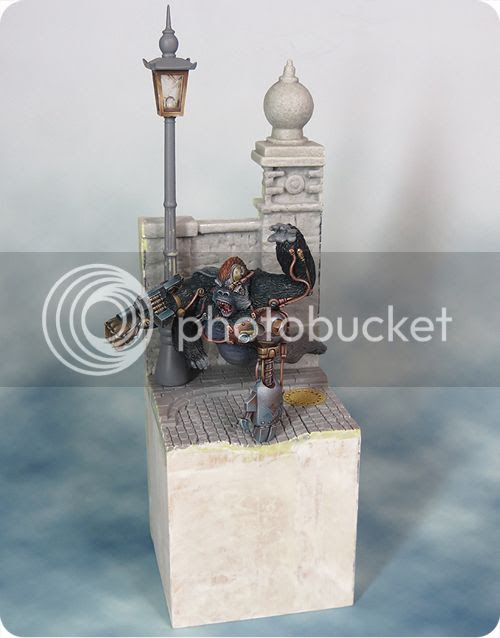