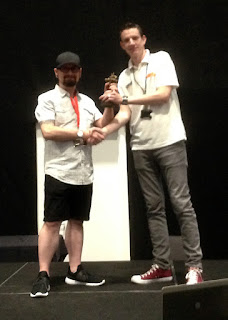 For some weeks I’ve had a gut feeling that Golden Demon 2017 was going to be a tough competition. There have been hints, subtle and otherwise, that quite a few well-known and highly accomplished painters were planning to attend. Each year I seem to say that the standard was higher than before but that was never truer than this year. The standard went through the roof and much of the work on display was so good it was scary!

With all my hopes pinned on just one model the tension of waiting to find out who the winners were was pretty high! When my Megaboss was placed among the winners on the top shelf I was greatly relieved. Having taken note of the fact that my model was the last one to go onto the top shelf in it’s category, and what that might possibly imply, my hopes were riding high. 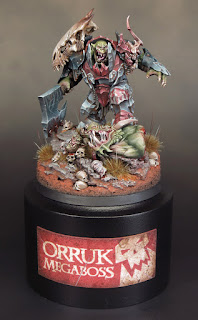 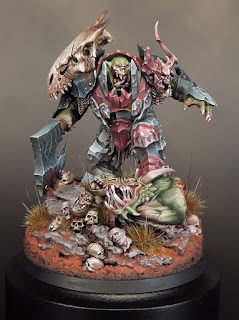 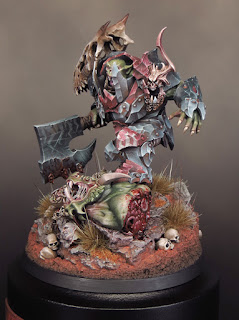 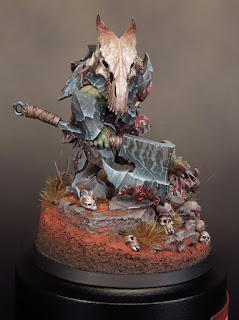 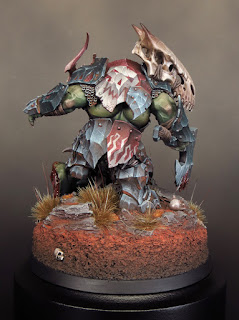 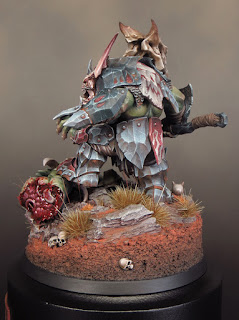 I wasn’t to be disappointed; my Megaboss took Gold in the Warhammer Age of Sigmar Single Miniature category! A fantastic result, even more so considering the standard of the competion this year. I can ask no more from my hobby than to find myself and my work in such talented company. 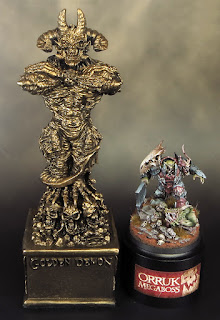 I’ve always felt that, no matter how good they think their work is, no painter should assume they are going to win something, not least the Slayer Sword. However, Michał Pisarski (Lan Studio) must have been feeling a fair degree of justifiable confidence with regards to his Enthroned Nagash. It’s a stunning piece of work and it was no great shock when it won the, well deserved, Slayer Sword!

With the addition of the Gaming Tournaments Warhammer Fest was bigger and livelier than ever. The event feels like it’s going from strength to strength and The Golden Demons are a big part of that. It was a bigger, busier, tougher and more exciting competition than it has been for many a year and long may it continue!
Posted by David Soper 9 comments:

2017 continues, as expected, to keep me very, very busy! But that was the whole idea behind becoming a full time hobbyist anyway. The only down side is that I’ve had to put Akito on the back burner for the time being. But it won’t be too long before I can give her my full concentration.

I’m very happy to report that Gutrot Spume has been repaired. I used plastic glue to 'weld' the broken parts together in a strong bond and, thankfully, it all went like a dream! I also remembered that I had some parts, including a helmet, from a spare Gutrot. So I've been able to replace the broken tip from the crest on his helmet. Once the parts were reattached a retouch to the paint on the affected areas completed the job. Gutrot is as good as new - I'm glad that's over! 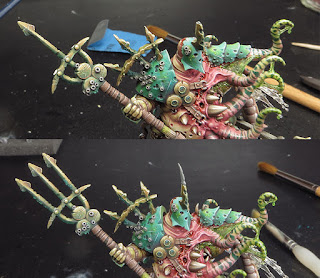 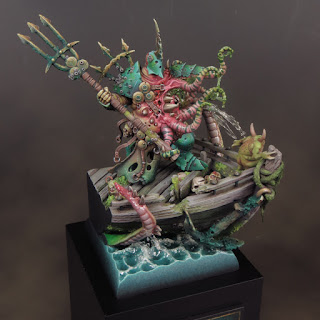 The Bicarbonate of Soda crisis – an update.

I've decided not to freak out over the white frosting that appeared on some of my minis where I'd used bicarbonate of soda mixed in with the paint. Instead I'm going to calmly monitor the situation and look into alternatives for future projects and fix for the minis.

I've already experimented with a couple of Games Workshop products, Stirland Battlemire and Typhus corrosion, and was able to replicate the texture effects I get with bicarb. I'm going to try sealing the affected bicarb with a spirit based varnish and hope that will protect it from changes in humidity.

The following pictures might be of interest. Picture 1 shows the worst of the white 'frosting' that appeared on my minis. Now this is where it gets a bit weird because the white 'frosting' has vanished! Picture 2 is more recent but there is no apparent damage to the painted surface and no trace of the white. Not even a hint of it having flaked off and left loose particles on the base! 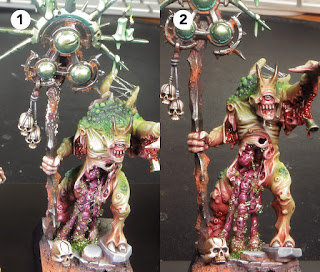 I'm very happy that my minis now look OK (for the moment at least) but I'm still not going to use bicarb again!

I’ve been waiting a whole year to enter Abalam into the painting comp at Salute and was rewarded with Bronze in the large scale category! A very satisfying result for what was a relatively speedy project. Although it means my quest to win Gold for a bust is still unfulfilled. But there is always next year and I have great hopes for Akitio. 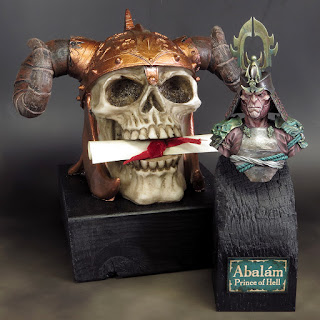 I didn’t quite enjoy Salute as much as previous years, which is no reflection on the show! I started off the day feeling fine and frisky but I’ve had a busy few weeks, and in the afternoon, it all caught up with me – big time!

My energy levels plummeted, which was a shame, but thankfully it didn’t ruin the day. I got to spend some quality time with my mates and met a whole bunch of painting friends, old and new, which is always the best thing about these events. The fact that I didn’t take in as much of the show as usual meant that I wasn’t tempted to spend my money, so there is a silver lining to be found there too. 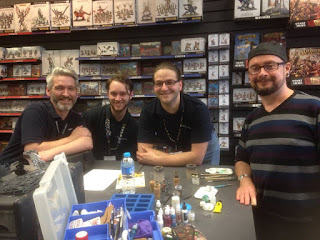 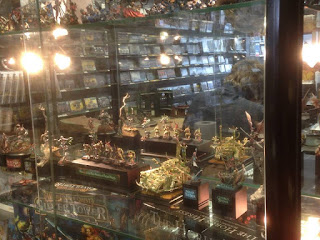 It's been 27 years since I last had my models in the cabinet at Warhammer Southampton so when I spent the day at Warhammer Southampton, on Saturday 29th April, I made up for lost time! I showcased my miniatures and ran some demonstrations of the techniques I’ve used on my Golden Demon winners. I also got to judge a painting competition! It was great to meet everyone and I’d like to say a big “thank you” to Rod and his team for making me so welcome!

I’ve had my eye on the Abyssal Warlord for some time and I think he is going to be a great workshop model! The model has several options for its weapons, head and costume, giving a degree of flexibility in it’s construction. It’s a well-designed model with plenty of detail and texture but, overall, it’s clear and uncluttered. This provides plenty of opportunity for creativity when painting it.

I wanted an armoured figure for the workshop as I’ve decided to focus on the materials, techniques and theory that I use when painting non-metallic metals. This is something I first explored on my Scourge miniatures but I’ve continued to develop my approach, most recently on my Megaboss. 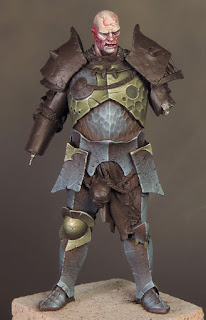 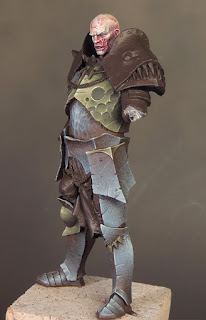 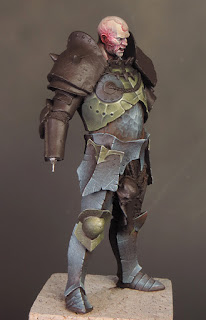 The Abyssal Warlord is proving to be, as I hoped, a joy to paint.

Tickets are now available for my painting masterclass at Element Games HERE but they are selling out fast!