It’s time for a long overdue update! An interruption in my posting usually means that, for one reason or another, I’ve not been painting but that’s not the case this time! I’ve been happily painting away to a regular schedule and making steady progress. Quite simply when faced with a choice between painting and writing about painting I’ve opted for the former. 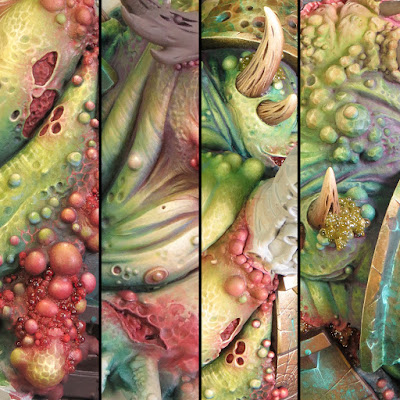 I’ve already written about the physical challenges presented by this model and they haven’t lessened. However I’ve now become used to handling and painting a model of this size and I’m coping quite well with this aspect of the project. I think the greatest challenges remain the psychological ones! The scale and level of expectation for this project, both from others, and myself are through the roof.

However, in spite, or perhaps because, of these challenges I'm very happy with how my Tank is going at the moment! I've had so many ideas and options to consider that the project’s overall direction has been a bit open-ended. As I said in my last post, I've had to editing my ideas as I go. That’s involved making as many choices about what I’m not going to do as to what I am going to do! Because of this my vision for the paint scheme has become much clearer over the last month or so.

My experience of this project is unlike anything I’ve had since I returned to painting. I regularly feel that I’ve bitten off more than I can chew and this strongly reminds me of the years when I was first learning my craft! Although I have a wealth of experience to call on, I can’t take it for granted that I will succeed. This is because this work is truly challenging me and I’m having to work my very hardest to resolve every aspect of this project. All of this can only be a good thing and so far I’m loving (almost) every minute of it. I’m getting more satisfaction from my hobby than I’ve had for some time!

In my last post I’d just finished painting the arms. The next area I turned to was the top of the model where the neck, back and shoulders meet. This proved to be a far more complex job than I’d anticipated! This part of the model is a major junction between other areas and involves transitions between different forms, textures, tones and hues. 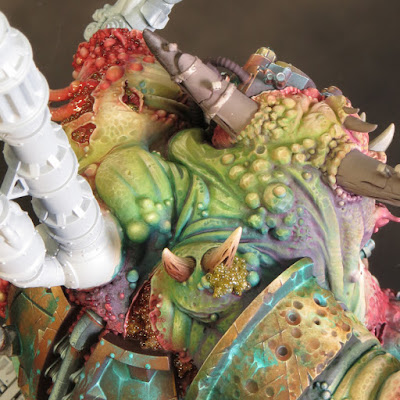 I’d initially considered painting the back, neck and shoulders with a dark green to create a counter shading effect similar to that on my plague bearers. I’ve retained an element of this but less pronounced than in my initial plans. My Tank is painted as though the light is hitting it from the top left. Broadly speaking there is a light (left) and a shade (right) side to the model. The upper back features the most obvious transition between them. In addition to the tonal transitions the hues on the shade side are cooler than those on the light side. 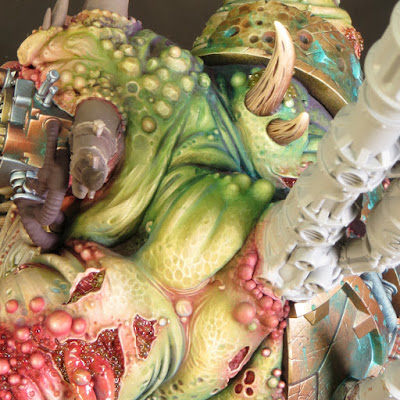 Figuring out these transitions took a lot of going back and forth to adjust and balance all the factors but it was well worth the effort. With this area painted the separate areas I’d worked on previously are now connected and the paint scheme feels more unified and consistent. 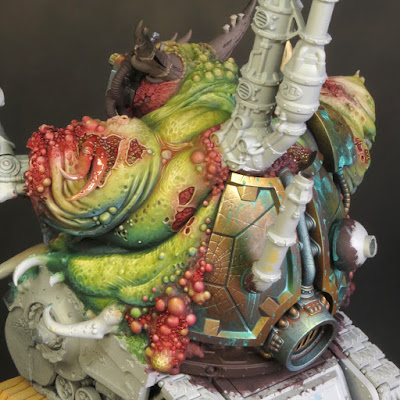 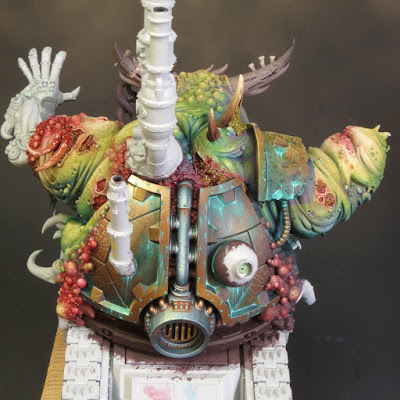 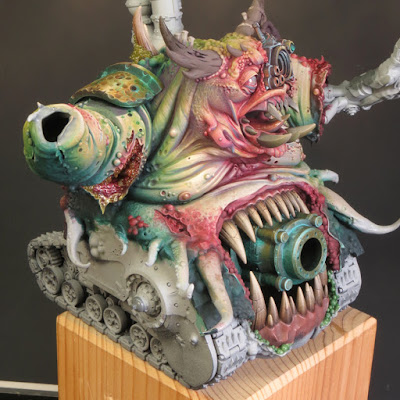 In the course of resolving this part of the model, I had to go back and adjust some of my earlier work. I’ve worked more of a purple hue into many of the shadows and strengthened the yellow/green hues in the mid-tone areas of the arms. Both of these changes were made by building up a series of controlled glazes over the appropriate areas. I fully expect to make further adjustments to my earlier work as the project progresses. I don’t consider any part of the model to be finished until the entire thing is finished.

I was then at the point where I needed to start addressing the boundaries between flesh and metal on my model. The upper area I had just painted is in contact with the large boiler/plate in the back of the model. The sides of the torso also connect with this area. When sculpting I’d decided to make a feature of this boundary and created an area of swollen bubbling flesh. 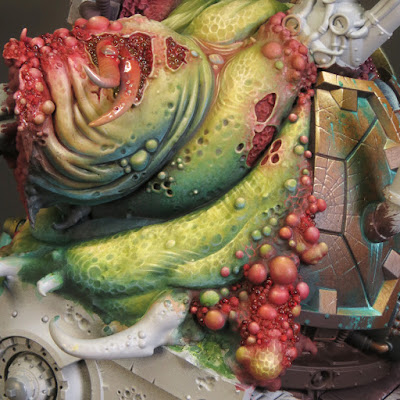 I’ve chosen to paint all areas of bubbling flesh on the model in warm red and flesh hues. The bubbling flesh often occurs where flesh and metal meet and I want it to have a raw and angry look as if it is trying to boil up and overwhelm the metal. 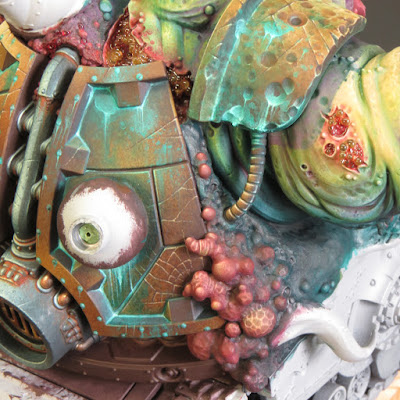 Having resolved the overall flesh tones to my satisfaction it became very clear to me that I needed to begin painting the boiler/plate. To be honest I was ready for a change, as I’d been painting blubbery green flesh for weeks!

As you can see from my pics I’ve gone well beyond the stages I’ve described in this post. I will next look at how I’ve painted NMM on the boiler/plate and how that has affected my overall colour palette. I will also describe my approach to painting corrosion on this model.