Rockgut Troggoth – Part 7. The Troggoth is done so it's time to start my Goblin.

This is the time of the year when I often think about endings and beginnings which, as it happens, is not an inappropriate attitude for my Troggoth project. I’d wanted to finish the Troggoth before Christmas and, having established a productive painting routine, I was able to achieve my goal!

Most of the work was involved in painting the second hand and this went more quickly, if not more easily, than the first. Having established my approach the first time around it was a matter of making the hands match, but with just a little variation so as to look more natural. 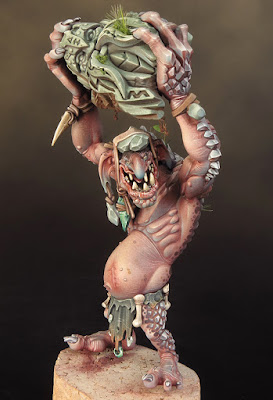 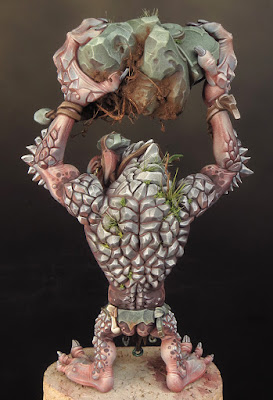 After the hands there were a number of small details to finish. Most these were rocks and leather straps and I had to force myself to slow down and paint them carefully. As a model nears completion I feel a strong urge to hurry up and get the job done. It’s important to resist this urge as it’s all too easy to spoil good work. This is also the time to take a good long look at the model as a whole and decide if any of the earlier work needs to be adjusted in the context of the overall scheme. 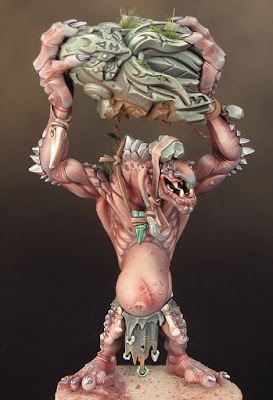 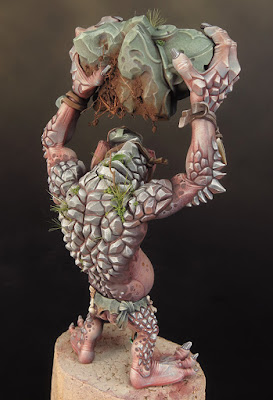 In the case of my Troggoth I decided to change the colour of a couple of the stone amulets he is wearing. I wanted to use just a little more green on the model to contrast with the overall red/brown warm tone. In addition to that the extra green, along with the moss and grass on his back, will tie the model in with the environment I’m setting him in.

With the Troggoth done I’ve turned my attention to the Goblin. I’d been unable to find a miniature in the exact pose I wanted! To be honest I hadn’t really expected to so I’d settled on the notion of converting a miniature. This would help me to tell the story I was creating. After searching through the range of Games Workshop’s Goblins I decided upon Zarbag from Zarbag’s Gitz. His pose had the potential to be converted with the minimum of fuss into what I wanted. The crucial change was to swap the hand carrying the lantern for one pointing.

I’d decided upon what hand to use as soon as I had the idea to have my Goblin pointing. I was already familiar with the pointing hand on the Poxbringer, Herald of Nurgle and this seemed perfect. Or so I thought until the hand turned out to be much larger than the one it was replacing. There was also the matter of it only having three fingers as opposed to the four on the Goblin’s hand.

My solution involved reducing the size of the hand with a lot of cutting and scraping, and swapping the hand holding the weapon for the other hand from the Poxbringer. Fiddly work for sure but it’s always worth the effort. I’d also decided to remove the cauldron hanging on Zarbag’s weapon. This was an unnecessary detail for my concept and it’s removal allowed me to have Zarbag raising his weapon off the ground in a more active pose that felt more appropriate for his new context. 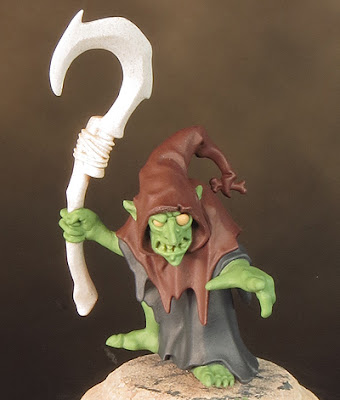 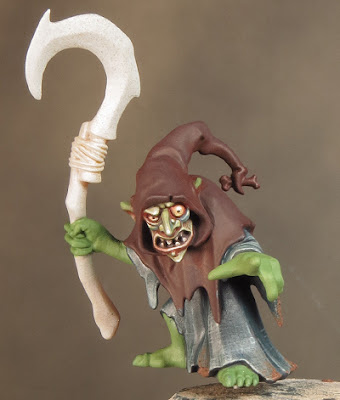 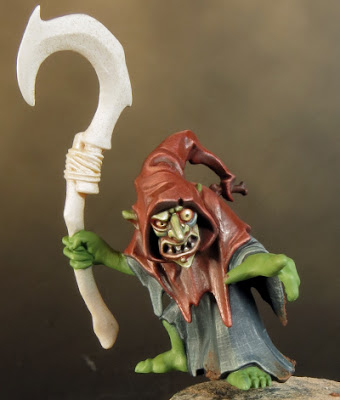 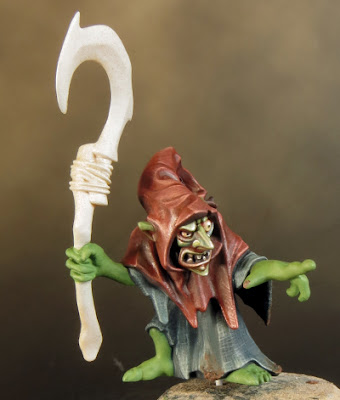 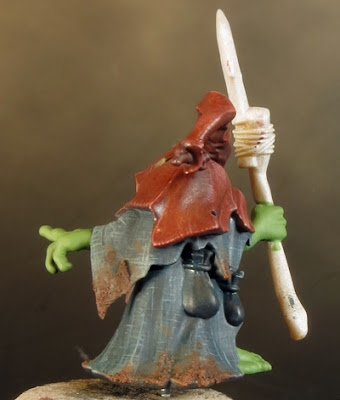 I don’t often base coat all my colours as a first stage but, as the model is so small, I decided to do so this time. This seemed the most straightforward way to go about things and it also helped me to visualize my overall colour composition. With the base colours down I can set about working the separate areas up to a finished state. I don’t anticipate this model taking me all that much time to paint, although experience adds a note of caution to that statement. The Goblin consists of four main colour blocks: the flesh, the hood, the robes and the weapon. I will paint the Goblin using colours from the same palette as the Troggoth to tie the models together!