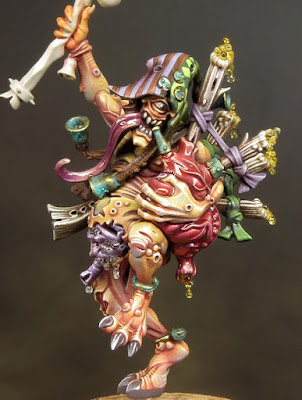 I’ve said it before and I’ll probably say it again ‘I don’t enjoy painting sub-assemblies’. The problems that can crop up, when glueing and filling already painted parts, play on my nerves. However, there are times when painting a model in sub-assemblies is the best solution. It’s something I’ll do when it’s the only way to get clear access to areas of a mini that, although partly covered or obscured by the addition of other parts, will be visible on the finished piece.

The Sloppity Bilepiper is an example of this scenario. On first inspection I thought it would be possible to assemble the entire mini before painting. However, I realised that the upper torso and the area featuring the pipes would be tricky to get at and might, as a result, look a little under painted. Although these difficult areas are often in the shadows I would rather paint them as such by choice rather than omission.

With the decision made to work in sub-assemblies, I first painted the head and the main body separately before I glued the head onto the body. The next element to deal with was the bag of the ‘gutpipes’ and the arm holding them. This was all fairly straightforward as the only visible seam was in the crease between the upper arm and shoulder.

All of the seams, visible or otherwise, on the sub-assemblies were filled with a 50/50 mix of water and PVA woodworking glue. I’ve used this mix before when dealing with a visible seam between painted elements of a mini, most notably on my Megaboss. It can take a few applications to fill even a small gap as the mix shrinks when it dries. However it’s worth the effort as it dries to a semi transparent matt finish that camouflages visible seams most effectively!


My troubles started when I turned my attention to the pipes! I base coated the pipes and then applied a wash and highlight before glueing them in place. This meant that any really tricky areas already had a ‘basic’ paintjob. While no part of the pipes proved inaccessible they were extremely fiddly to paint.

I rapidly found this part of the mini very frustrating. A problem made worse by boredom. I’ve never been very good at painting multiples of the same things because I quickly get bored and once I’ve painted something I like to move on and paint something different. It’s an issue I have to deal with on most projects at some point. A typical example would be the soul stones found on GW’s Aelves and Aeldari minis.The pipes really shouldn’t have been that much of a problem, but they very nearly got the better of me and I very quickly began to hate them!

In truth my frustrations were more to do with the upheaval and disruption following Mark’s stay in hospital and his ongoing recovery. As we tend to take things on a day-by-day basis I’ve not been able to establish a regular and consistent routine. I’ve come to realise just how much I like to plan ahead and organise my days and weeks. It’s going to take a while to get everything back to ‘normal’ in the mean time I’ve had to work my way through a tricky patch and remember not to dwell on problems and frustrations. After all mini painting is my hobby, not my job, and I do it for pleasure! 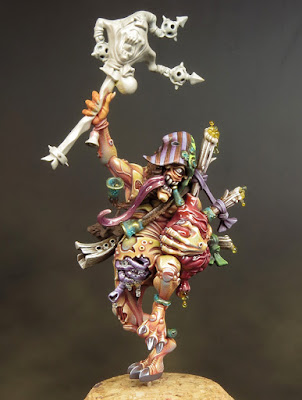 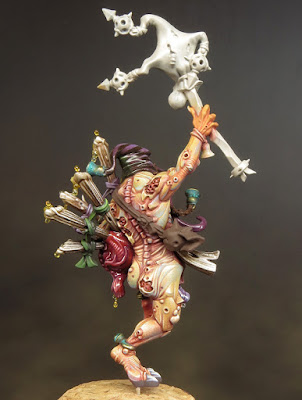 Once the pipes were (finally) painted things took a definite turn for the better. I’ve been able to get back into the habit of painting every day. Even if it’s only for a short time it’s made a huge difference and I feel like I’m making steady progress. Better still I’m really enjoying the project again and I’m feeling pleased with what I’m achieving. The Sloppity Bilepiper is a mini with great potential and I’m beginning to think that I might now be able to do it justice!
Posted by David Soper 3 comments: