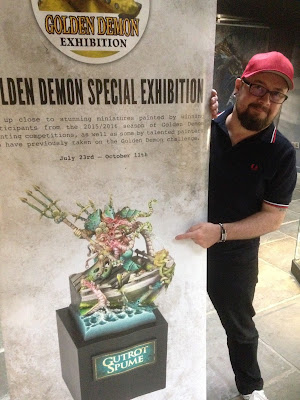 So I dropped my minis off at Warhamer World on Saturday. I got such a happy buzz from seeing Gutrot blown up huge on a banner and realising how well my old Predator stands up next to other, more recent, minis. 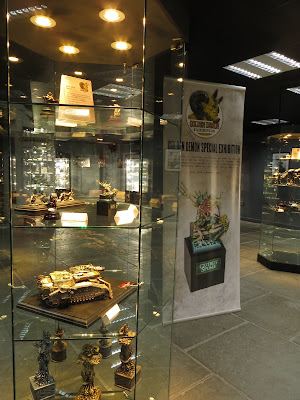 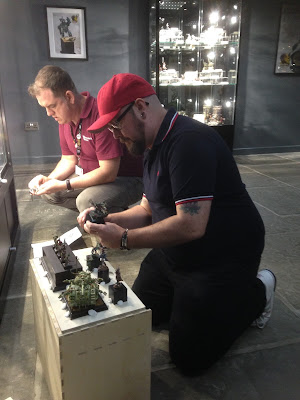 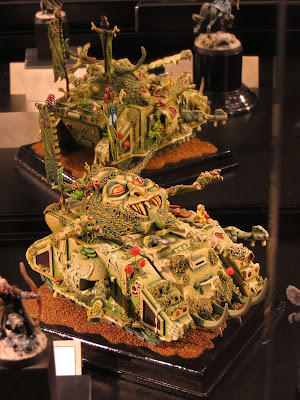 So far the Megaboss has been a joy to work on and that’s helped me get back into the swing of a regular painting schedule. I keep forgetting quite how big this mini is, but it gives me an opportunity to add lots of texture and detail. 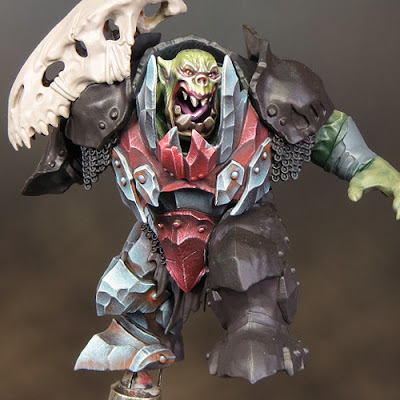 I’m going to be painting the armour for a while, but it’s not proving to be too great a chore. For the areas of bare metal, I’m using a similar scheme to the one I used on my Scourges. The blue/grey creates a nice contrast to the areas of red painted armour while the brown tones, in the shadows, tie it all together. 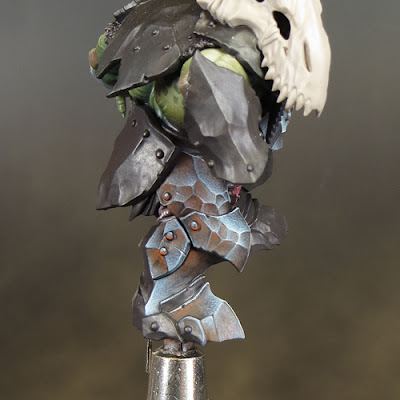 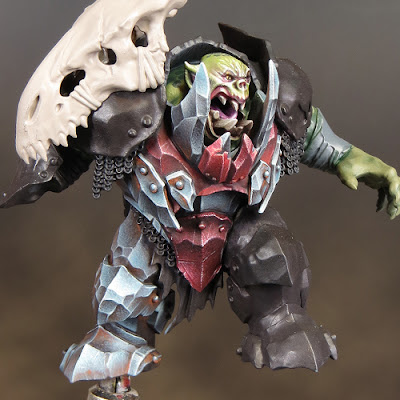 Once the armour is done I’m going to try my hand at painting some freehand glyphs. I used to paint quite a bit of freehand decoration on my minis but it’s been a long tome since I’ve attempted an elaborate scheme. I’m very much looking forward to the challenge or reviving old skills!

Gutrot Spume and his pals are packed and ready for a little holiday in Nottingham! I couldn’t make it to the Golden Demon winner’s day this year, and so once again missed the opportunity to have my demon winning minis displayed at Warhammer World.

Well better late than never, this Saturday it’s finally going to happen! I’ve a few year’s worth of winners to catch up with (yes, that is the 1990 Predator at the back) and it’s great to think that my work will be displayed alongside so many awesome minis!
Posted by David Soper 3 comments:

The past month was, as I predicted, an extremely busy time for me. Despite that, and my inability to update this blog for a while, mini painting has never been far from my thoughts.

I took a holiday in Italy this year and, as I was based in Sorrento, the ruins of Pompeii and Herculaneum were within easy reach. I’ve been to both sites before but had a strong desire to return and explore them in greater detail. One of the things that always stands out to me when visiting Roman sites is the predominance of brick built structures. This is in strong contrast to the Hollywood vision of gleaming white marble everywhere!

While exploring Herculaneum it stuck me that these Roman buildings were an excellent source of inspiration for miniature basing. Many of the walls showed evidence of repairs and alterations. The resulting patchwork was a mixture of different types and styles of brickwork and stone blocks. Using these walls as a source of inspiration would add a lot of visual interest, and a touch of narrative, to any brickwork on a scenic base. 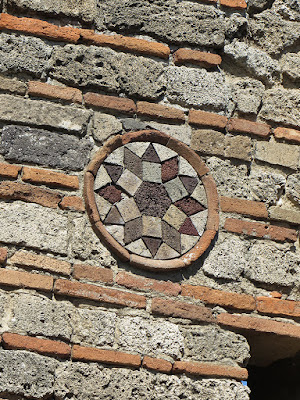 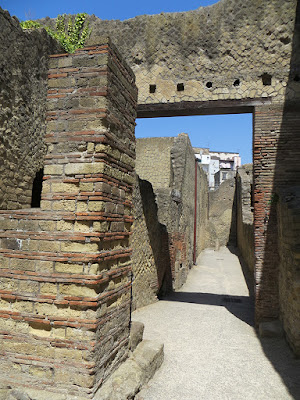 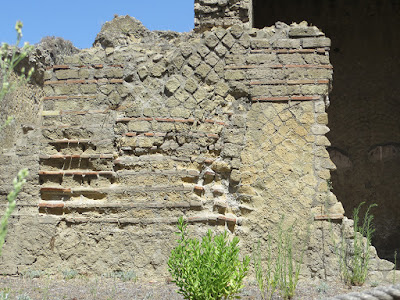 Once back from my holiday I had just over a week to finish preparations for my Weekend Workshop in Cambridge. I’d decided to push the group a little harder this time. On the Saturday I introduced the group to my style of painting flesh. This involved the, what was to many, a new painting technique with a fair bit of supporting theory. I’d set the group a challenging task, but everyone got stuck in with admirable dedication to the task.

Sunday was devoted to consolidating and building upon what had been learned the day before. The rust, slime and drip elements of the course come towards the end as you need a painted mini to work on; but it’s also a fun way to round off the weekend’s painting. Throughout the day everyone continued to make steady progress and many of the plaguebearers reached a fairly advanced stage of completion. Considering the limited time this was no mean feat in itself. 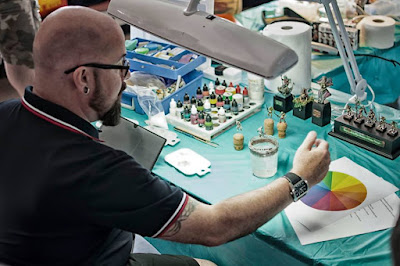 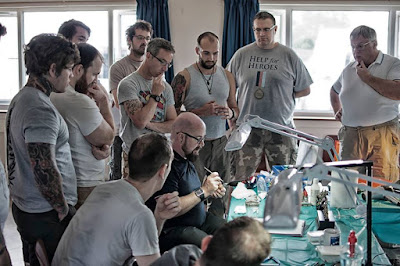 Still more gratifying was the way that everyone worked through the challenges of embracing something new. The final crop of plaguebearers all clearly showed the progress that had been made.

Grandfather Nurgle would be impressed – I certainly was!

In the days following the workshop I’ve been getting myself sorted out ready to resume a regular painting schedule. I’m itching to get back to painting my Megaboss and seeing him finished.
Posted by David Soper No comments: