When I choose which miniatures to paint I do it by gut instinct. A miniature will grab my attention and inspire me to paint it. My best work has always come from that initial burst of enthusiasm, without which I would quickly lose momentum! 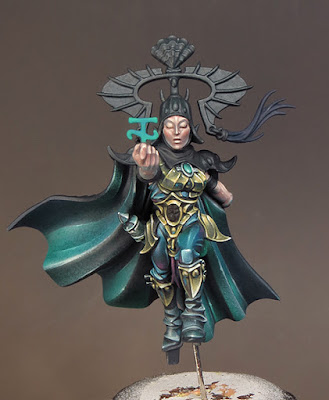 Over the years, I’ve displayed a distinct preference for certain types of models. I’m known for my Nurgle themed minis but I’ve also painted quite a few elves in their various guises. In addition I’ve been drawn to models with a nautical, or undersea, theme on several occasions. 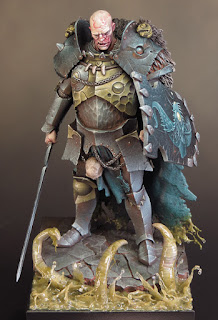 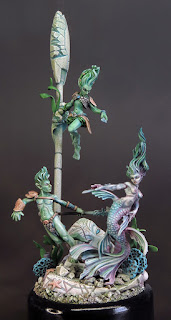 So there are no prizes for guessing what this is leading up to because the recent release of the new Idoneth Deepkin was bound to capture my attention. After much deliberation I decided to paint the Isharann Tidecaster.

I’ve chosen this model first and foremost because I really like the ornate armour, dramatic pose and striking base. But I was specifically looking for a single character model to paint, rather than anything larger, as a comparatively quick project. Put simply it’s what I fancied doing before I return to Horticulus Slimux and Mulch!

The Deepkin are a fascinating new twist on the Aelves and their conflicted dual nature. Once there were clear choices between High, Wood or Dark Elves but now the old definitions are gone and the boundaries seem blurred!

Right from the start I wanted to go with a dark, sinister scheme for my Tidecaster something that would help to convey the idea of the cold inky depths. I also knew that my scheme would feature lots of saturated blue and green tones. This would reinforce the atmosphere while bringing some variation to a dark colour palette. 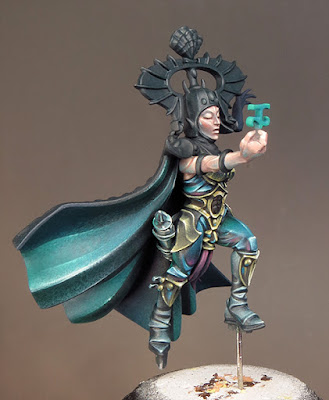 My overall colour scheme has a cool blue/green cast to it, evoking an under sea feel, but it needs some contrast. In order to give the blues and greens an extra pop, I’m using purple worked into the shadows. This gives my blues an oily/iridescent look. But the strongest colour contrast comes from the armour.

Silver would seem to be the obvious choice but I decided to go with gold! I wanted a little bling for the scheme and gold will certainly provide that. It also provides a strong colour contrast to the blue tones. 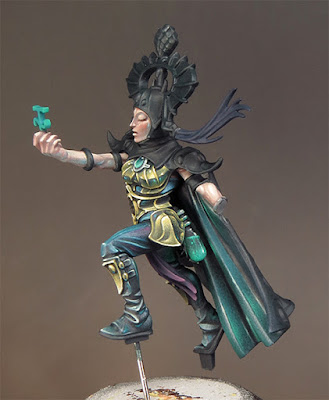 A potential problem with all this blue and gold is that it could look very ‘High Elven’ and ‘good’. That’s countered by the overall darkness and also by the gold tone I’ve decided to use. Like the Abyssal Warlord this model features a cold gold tone. I’ve also gone for a dramatic high contrast look with almost pure black shadows. This is something I’ve wanted to try for a while and the Tidecaster gives me the perfect opportunity.

The high contrast cold gold is a little tricky to get right but I like how it’s beginning to look in the context of the overall scheme. The Tidecaster is perhaps the least sinister looking of the new Idoneth Deepkin models but I think I’ve managed to catch something of their inner darkness with my scheme.

Next time I’ll look in more detail at the colours I’ve used in my palette to create my Deepkin colour scheme.