For the best part of a year I’ve had difficulty in establishing a regular painting routine. That hasn’t prevented me from making progress but it’s been coming in fits and spurts. Now life is settling into a more regular pattern I’ve been able to focus my energies back onto my hobby and, over the last week, I’ve made a point of painting every day. Taking a ‘little but often’ approach is a very good way of getting back into the swing of things. I think its far better to break out the brushes for an hour or so every day than to attempting some sort of marathon painting binge!

It’s a less punishing approach and it works very well for me because, if things don’t go so well, I can simply put my brushes down and try again tomorrow. I usually find that after a couple of days I get into the flow and end up painting for three to four hours a day. Such has been the case and it’s resulted in some satisfying and productive painting. 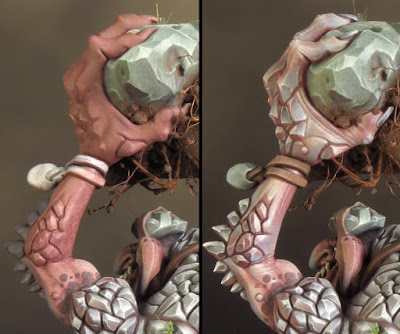 Which is just as well because it was time to turn my attention to one of the potentially tricky parts of the model. Hands may not be quite as difficult to paint as faces but I’m undecided about that! A model’s face is usually its focal point and a major element in creating the illusion of a living being, but don’t ever overlook the hands. Hands are used to communicate and they can be just as expressive as a face. They are usually a key element in a model’s pose - be that making a specific gesture, holding a weapon or as part of a greater action. Hands will always be doing something, even if it’s something subtle. 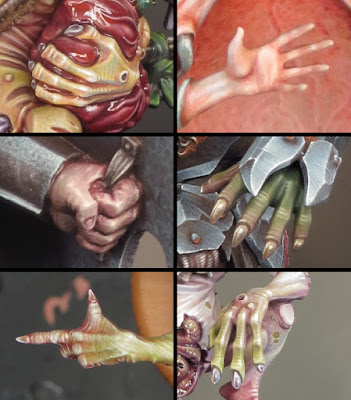 On top of those considerations hands have a lot going on in terms of their form and structure. Fingers are not simply fleshy sausages (unless you are having a very bad painting day) but contain bones, joints and tendons all of which affect the overall form. It’s important to have an awareness of the structures inside a hand in order to paint the outside surface.

In addition to that some of the structures inside a hand, like the veins and joints, may be visible through the skin. As if things aren’t complicated enough you also need to consider how the character’s age, gender, ethnicity and species will affect your painting choices. In short hands can be extremely complex to paint and, like a face, if you get them wrong they will undermine everything else!

Which should all go towards explaining why I’ve taken the best part of a week to paint one hand on my Troggoth! It’s particularly important to take the time and effort in this case because the hands are, literally, a huge part of the Troggoth. The hands are at least as big as the model’s head and feature the distinctive stony scales that are a defining element of the Rockgut Troggoth. 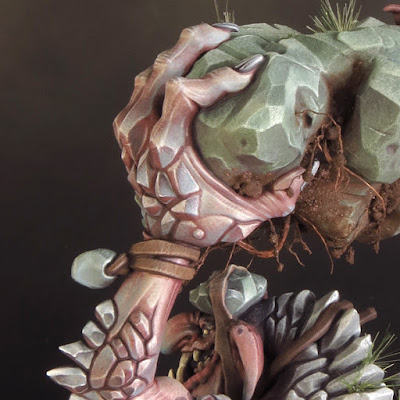 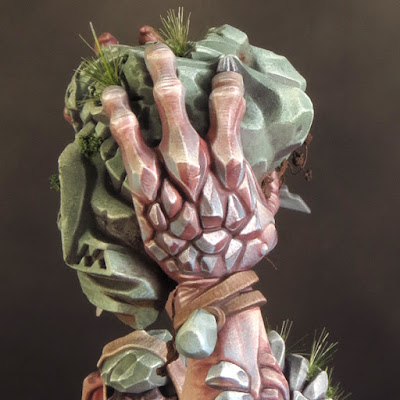 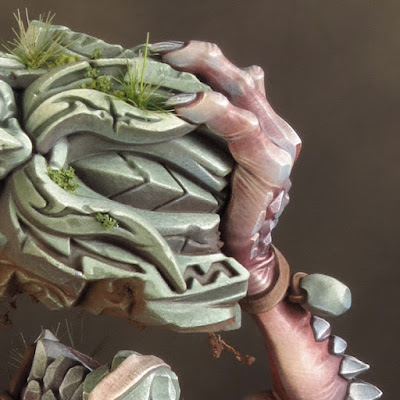 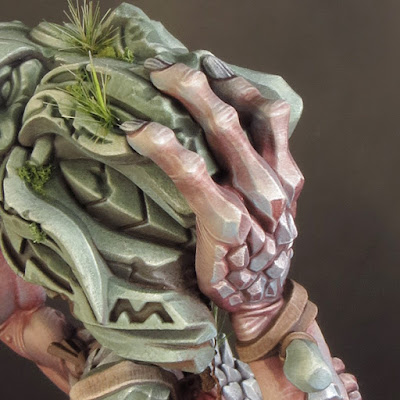 My colour palette for the hands is the same as for the fleshy parts of the Troggoth. I‘d considered painting the hands in the same grey/brown colours as the stony back. But I felt they would not stand out against the boulder they were holding if I did this. I also wanted to create some variation within the stony textures on this model to describe the transition between rock and flesh. To do this I’ve painted the stony parts of the hands and forearms in my flesh colours. So, although painted with the same sharp highlights, the ‘pinker’ stone parts look a little softer than the grey stone parts. 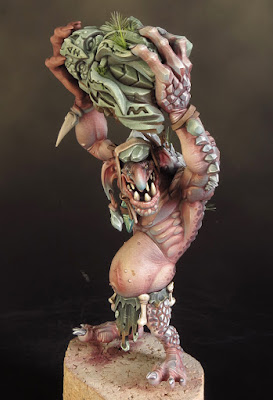 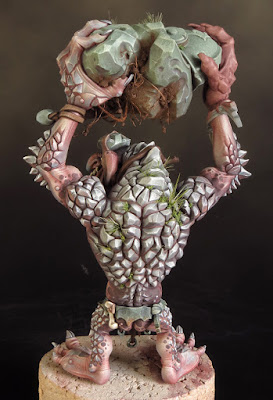