Creating a Colour scheme. Part 1 of 3

Having decided to write a series of tutorials on my Kastelan Robot I quickly realized that, before I get to all the fancy stuff, I need to go right back to the beginning. Colour is a fundamental part of miniature painting and a good understanding of how colour works is key to creating and controlling contrast.


To be honest this subject could easily fill a book so I’m going to keep things as simple as possible (here’s hoping) and explain my personal approach to colour and colour schemes.

That’s a very important point to stress because I’m not claiming that anything I write about here is the ‘only’ or the ‘best’ way of doing things. In the same vein, I’ll try to be clear, concise and consistent with the terminology I use and explain it where necessary. But you may well encounter different terminology from other sources. So please remember this is my way of doing and saying things, no more and no less.

First of all we need to understand the nature of any given colour if we are going to use it successfully. To help us do that we can describe a colour in terms of four values or characteristics. They are Hue, Saturation, Tone and Temperature.


Red, orange, yellow, green, blue and purple are examples of hues. The order I’ve listed them in relates to their position in the spectrum and on the Colour Wheel. The different hues contrast with one another in various ways depending upon their position on the colour wheel. 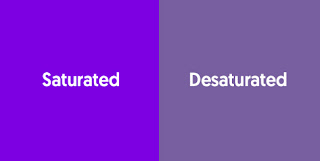 
This refers to how light or dark a colour is.


This refers to whether a colour is warm or cool. This can be quite complicated because the relative temperature a colours will be dependent on context. For example while red is most definitely a warm colour a purple/red is cool next to an orange/red. But the Same purple/red would be warm next to a blue. 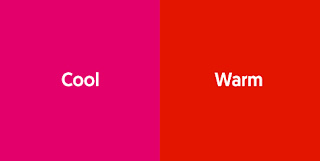 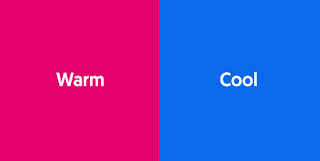 It’s important to remember that all aspects of colour contrast should be considered in the context of an overall colour palette.


The colour wheel is a reference tool that can help us to understand the relationships between different hues. You may well find more complex versions elsewhere but the basic example I’m showing here has served me well since I was 14! 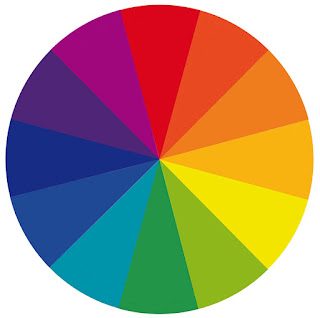 The hues are arranged around the wheel in a specific order that relates to their position in the spectrum. The three primary colours red, yellow and blue are at equidistant points with the intermediate shades between them. We go from red to yellow via orange, from yellow to blue via green and from blue to red via purple.

Adjacent hues are considered to be in harmony with one another. A colour scheme only using hues that sit next to one another on the colour wheel is called an Analogous Color Scheme.

Technically speaking analogous hues are three hues next to one another on the colour wheel. But for my own purposes I consider any adjacent group of between two and five hues to be analogous.

While it’s possible to use a solely analogous or complimentary colour scheme it’s also possible to include a combination of hues that features both types of contrast within the same colour scheme.

Analogous and complementary schemes are both built around a contrast between hues. However you will also need to consider the saturation, tone and temperature of those hues. This can greatly alter the nature of the colour contrast.

For example a green and red directly opposite one another on the colour wheel, and of roughly the same saturation and tone, will have an extreme contrast. This may be too strong and visually confusing. That is what’s meant when colours are said to clash! 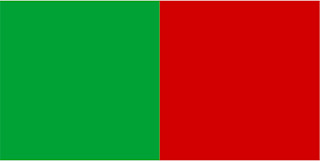 In the next example I’ve lightened and desaturated the green while the red has been darkened. This has altered the contrast so that, although still very bold, it clashes less. 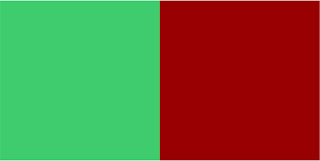 In the final example I’ve further adjusted the contrast by making both colours slightly cooler. Both the red and green now have a bluer hue making them slightly closer on the colour wheel. They are still complimentary but are now also more harmonious then the previous two examples. 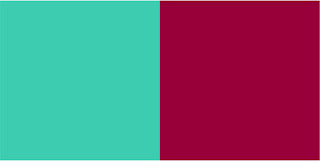 If you are familiar with my work you may recognize that final example was the basis for my Gutrot Spume colour scheme.

The strongest and most obvious colour contrast on Gutrot is that between the complimentary hues of red and green. As shown above I’ve chosen to use relatively cool versions of both colours; but there is more going on with my colour choices than a simple complementary scheme.

In addition to the turquoise blue/green I have used other warmer yellow/green hues and together they make up an analogous grouping of colours within the overall palette. There is a strong temperature contrasts between the warm and cool colours. But a more subtle temperature contrast also occurs between the warm & cool greens. Most of the colours on Gutrot are saturated but they are in contrast to the desaturated brown & greys on his base and equipment. The tonal contrasts between the colours are relatively understated.

By understanding the characteristics of the colours in my palette I’ve been able to balance what might otherwise be an overcomplicated and visually unclear colour scheme.

There are no rules about what type of colour contrast you should or shouldn’t use when painting your models. The important thing is that you understand the characteristics of the colours you are using. You are in control and everything that happens in a colour scheme should be there because you have chosen to feature it.


I'll take a look at colour palettes and how (from my point of view) they differ from colour schemes. Then I will describe how I go about building a colour palette for my projects.