‘Alas, poor Gutrot! I knew him, Horatio, a fellow of infinite jest, of most excellent fancy.’

The Tragedy of Sproket, Prince of Denmark Act 5, scene 1. 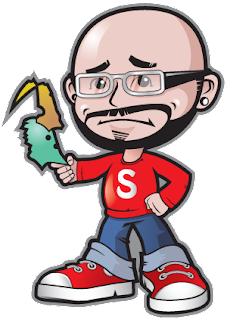 I’m something of a nervous traveller, especially so when it come to transporting my miniatures. But with the exception of my Nurgle Predator, which arrived at the 1990 Golden Demons with a broken banner, I’ve been lucky enough to have transported my minis without any mishaps. Until now that is!

I knew there would be an element of risk involved in taking Gutrot Spume with me to Copenhagen last weekend. But Gutrot was the best choice to bring as an example of how I brought together different types of contrast on one mini, so I took a deep breath and packed him up with all the care I could. I’d purchased an ‘Art Bin’ to transport my models in and, although this proved to be an excellent practical choice, I think it was also my undoing!

The damage was done before I even left Heathrow Airport. Going through Airport Security I’d placed my Art Bin on the conveyor to be scanned. There was then the usual business of going through security myself and then having to put my belt and shoes back on. I looked up from this to see my Art Bin being held up and shaken from side to side by one of the security officers! The whole thing happened very quickly but my partner witnessed the tragedy play out. It was turned around, tipped and then turned completely upside down before the shaking was administered. It was then shoved back onto the conveyor belt and scanned where it was, of course, deemed safe and harmless!

I can only think that my Art Bin drew this attention because it was an unusual looking piece of hand luggage, which is fair enough. I appreciate that the security checks are vital and are as much in my own interest as anyone else’s. What I don’t understand is why it was necessary to treat my Art Bin so roughly! Based on the treatment it received it was clearly deemed unusual rather than dangerous. After all why would anyone, let alone a trained security officer, pick up and shake something they considered a potential hazard!

The security staff all have a very important job to do and are far too busy to pander to the concerns of an uptight miniature painter. But I can’t see any good justification for such careless and, quite frankly, aggressive treatment of a person’s property. The staff at Copenhagen airport were no less busy and just as vigilant but they managed to carry out their duties in a way that treated both passengers and their property with respect.

Now I’ve got that off my chest my ranting is over and my priority is getting Gutrot back to his gruesome best.

I decided to wait until I got to my hotel before I opened everything up to see the damage. I suppose things could have been a whole lot worse considering the rough treatment but the sight that awaited me sent my blood pressure through the roof! The prongs on Gutrot’s trident have all been snapped off. Mercifully the breaks are clean and at the base of the prongs where it should be possible to reattach then. I should then be able to reinforce and cover up the join with a little extra corrosion. More problematic is the damage to Gutrot’s helmet, as the tip of it’s crest has been snapped off. I will see if I can rebuild this tiny part but it may be necessary to trim the crest down to a new, shorter point. 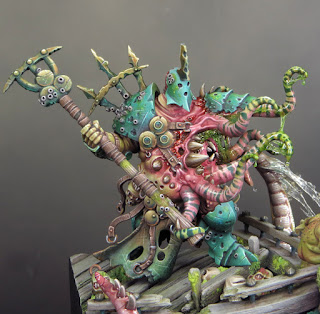 On reflection I got off lightly, as the breaks are clean and only affect the extremities. It’s a massive relief that the paintwork has suffered no damage beyond those breaks!