It seems like everybody is painting Nurgle minis at the moment. Which is no great surprise considering the recent glut of impressive new Nurgle minis. How could I ever resist!

From the moment I first saw Horticulous Slimux I knew I was going to paint him. Every now and again a mini comes out that ticks all my boxes and this one does that to the max! Games Workshop rarely releases minis with such a strong feeling of whimsy. That, along with the almost cartoon like styling and subject, give this mini a strong ‘old school’ feel. On top of all that he’s Nurgle’s head gardener and, possibly, the first ever Plaguebearer! The last two details have given me lots to think about and inspired my approach to painting him.

It would have been pretty straight forward to break out the forest green and paint Horticulous Slimux in the same way as my other plague bearers. But I had a nagging feeling that, for me, that would be too obvious an approach. Horticulous Slimux is a significant character in the Nurgle pantheon and as such requires special treatment.

He is a truly ancient being and I wanted to reflect this in my paint job. To put it simply, I wanted him to look old. After a little time pondering this I’ve decided to paint him in a pale desaturated flesh tone. I think an almost human flesh tone will give him an extremely creepy feel. To help create the feeling of great age I’m painting a lot of lines and wrinkles into the texture of his flesh. I’ve also decided to paint his eyes (he has five) as though they are fogged over with cataracts. 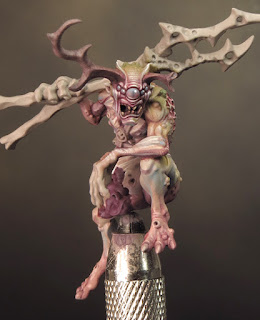 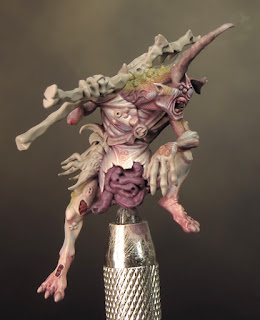 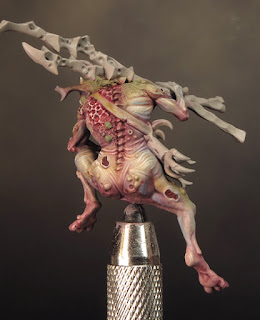 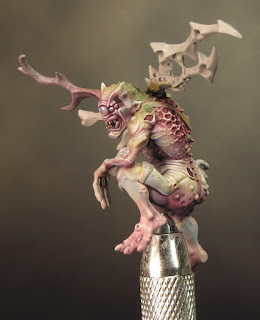 For my colour palette I’ve used a range of colours that incorporate blue, yellow and red tones alongside neutral and flesh tones. This approach is the same as the one I used for both Akito and the Abyssal Warlord and it’s served me well in achieving realistic pale flesh tones.

Realism is going to be a key word in my approach to painting both Horticulous Slimux and his steed Mulch. The sculpt is in a cartoony style and, although I love this, I’ve decided to play against it with my painting style. I don’t expect the finished paint job to look ultra naturalistic (he’s a plague demon on a giant demonic snail after all!); but I think using lots of ‘real world’ reference, and a palette of muted ‘natural’ colours, and will give the finished result something a little extra.

I’ve painted quite a few Nurgle minis and I don’t want to fall into the trap of getting too comfortable by simply painting ‘more of the same’! I’m on the lookout to find a new angle and using ‘real world’ reference will help me to do this. I’ve sourced pictures of slugs, snails, frogs and caterpillars. I think they are going to be a great source of inspiration!
Posted by David Soper