I first posted this project back in December 2017 and said it would be bubbling away in the background. Never was there a truer word as my updated predator has been constantly on my mind even if it wasn’t on my desk! I’ve been considering what kits to use and how to bring them together into one cohesive entity. This has been tricky because, although I had a concept and ‘feel’ for what I wanted to achieve, my ideas were very amorphous.

I needed to start tinkering with actual models in order to get the new tank out of my head and into physical reality. Once I started arranging the elements with adhesive putty, I’d be able to play with different concepts and compositions. The first step was to build the predator tank.

And there the project stalled! Something felt wrong and I couldn’t put my finger on what it was for some time. When I finally realised what wasn’t ‘doing it’ for me it was a bit of a shocker because I didn’t like the tank I was using!

I’d chosen the old style Predator Tank as a direct homage to my 1990 model. That seemed like an obvious choice but it felt unsuitable for what I wanted to achieve this time around. The old tank has a rigid boxy shape and my instincts were to use something more rounded and organic. For a long time I struggled and eventually realised that if I used the old style tank I would be fighting against it throughout the entire project.

I decided to let go of the old and embrace the new. This project was, after all, an updated version of an old concept and not a recreation. It took me a while, and a fair bit of agonizing, to make this choice but once I did it felt right. The new Tank I decided to use was the Death Guard Plagueburst Crawler. To be honest I’m appalled I ever considered anything else. It’s a Nurgle tank with a rounded form and organic details and if it had been around in 1990 I’d have used it then without hesitation. The new tank will take full advantage of the range of kits now available. 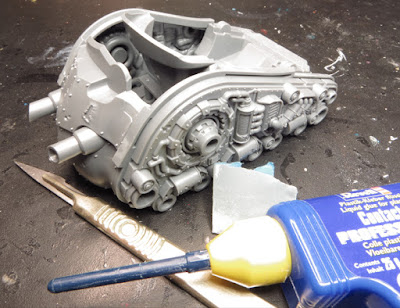 So the first big decision for Project P30 is that the new Predator isn’t a Predator after all!

Things then progressed at a slow but steady pace. I put the core of my tank together and then experimented with an assortment of extra kits. Straightaway I could see that the Plagueburst Crawler lent itself to the concept. It’s organic shape worked well in combination with the various ‘body parts’. I was now able to decide upon which exact parts I would be using for the major elements of the build. I’ve decided to use the torso from the plastic Great Unclean One as the basis for the torso of my demon engine. The arms will come, in part from the Chaos Maulerfiend but what about the head?

This has been one of the big questions I’ve had from the start. On the original tank I sculpted a face onto the Predator’s turret creating a head. With the new model I wanted a more fully emerged demon and that called for a distinct head and torso. I played with the head options from the Great Unclean One and considered having three heads. Three is, after all, a very nurglish number. But, although it had some possibilities, I felt it was a timid solution and not a true reimagining of the original.


I was pussy footing around the idea of sculpting a head from scratch. It’s been a few years since I’ve done any sculpting and the idea was pushing me way out of my comfort zone. There was only one solution I’d have to man up and break out the green stuff!