Basing the Kastelan Robot… oops I did it again! 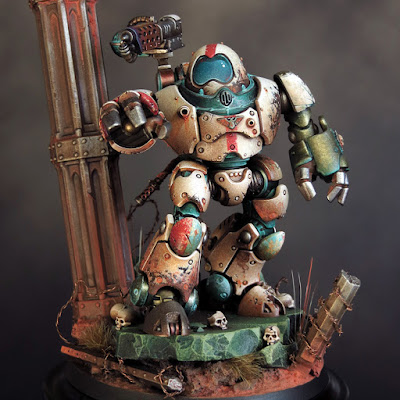 The Kastelan Robot was painted as a demonstration model for my new weathering workshop. As such I hadn’t planned on basing the model. However, as the project progressed the model was turning out very nicely and it seemed like a wasted opportunity not to put it onto a base. So I began to consider my options and in the end I came down to just two:

Let’s be honest option two was always going to win out as that’s what I always end up doing. But I did seriously consider option one.

I think it’s best practice to consider your basing options right at the start of a project. That way your ideas for the environment and narrative can play a part in the development of the overall scheme. However, though not perfect, it is possible to paint a model and then think up a base for it.

The model had been painted to demonstrate weathering so I wanted to continue with this approach and feature some heavily weathered architectural elements on the base. I decided to build the majority of my base using Games Workshop’s Sector Imperialis Administratum kit.

My starting point was one of the broken columns and I built out from this using a selection of other ruinous elements. I wanted to have the Kastelan Robot framed by a combination of broken arches and windows. By using one of GW’s own kits I would also be setting my Robot in an apropriate environment. 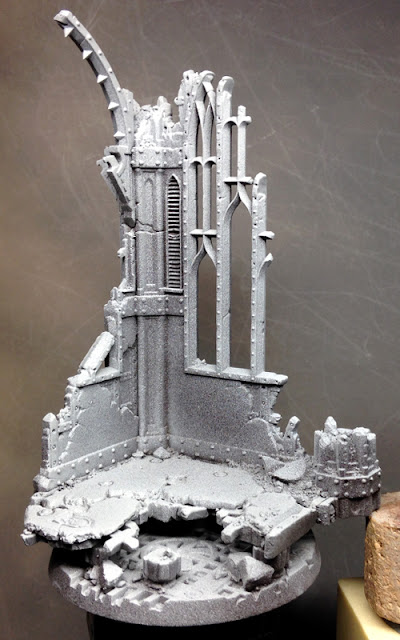 Instead of using a plain gaming base I chose one of the Sector Mechanicus bases and then built a raised floor above this to give the base some extra depth. The entire base was then finished off with some dirt and rubble.

I was quite pleased with the resulting base. But please take note of my use of the word ‘quite’. I had a few doubts about the overall proportions and composition of my base. This is in no small part down to the base being something of an afterthought to the painted model. However, I went ahead and began painting. 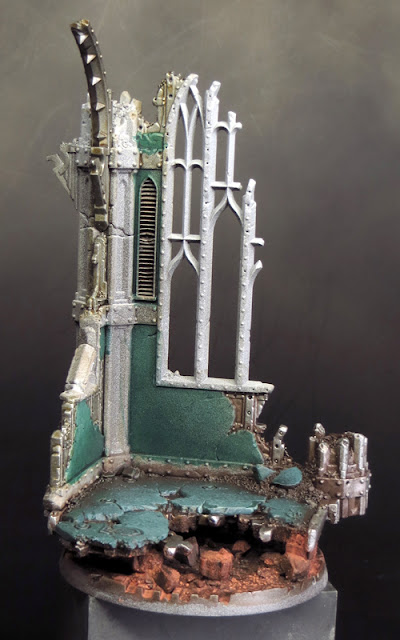 Painting was off to an OK start but my nagging doubts were now in full flow! Something about the base just felt wrong to me. It was time to stop work and think very carefully. If you are a long time follower of this blog you’ve probably guessed exactly where this is all going because we now get to the ‘oops I did it again’ bit.

The overall composition was too busy, obscured the Robot from several angles and was in danger of overpowering the model. In addition the design looked slightly clumsy and inelegant. I also felt that my decision to use pre-made building elements was a bit lazy and had influenced my design choices too much.

My solution was to start over again. This time I would construct a far simpler base that was less reliant on the Sector Imperialis Administratum kit. Construction began in the same way as the first base with a column. But the new base would not feature any of the wall or window elements. Instead I used plaster and Milliput to build a surface of broken slabs and rubble. I used a few bits of window frame from the building as further wreckage that, along with the column, would frame the Robot. 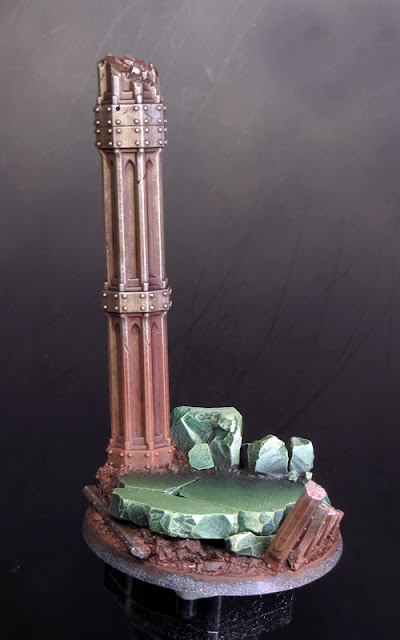 Straight away I was much happier with this more streamlined approach and, once I began painting, I found a whole new energy and enthusiasm for the project.

After painting the base, I pinned my Kastelan onto it and began work on the finishing touches. These consisted of the inevitable skulls and grass tufts but also some barbed wire to help give the base the feel of a warzone. The very last thing was the addition of some fine dirt and rubble around the feet and some subtle brown washes on the green slabs. 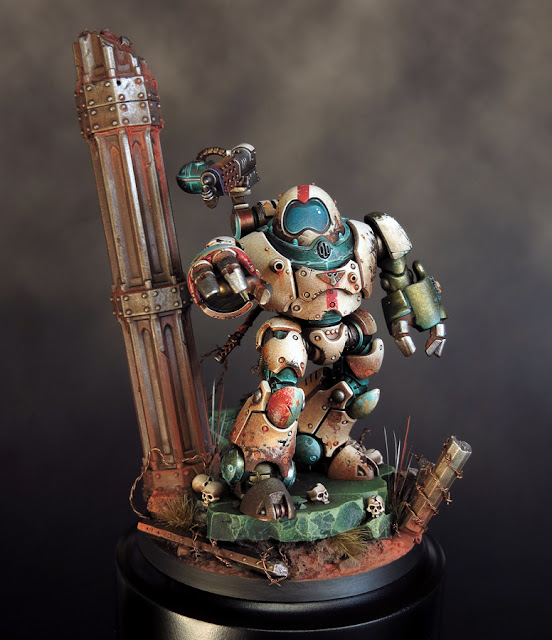 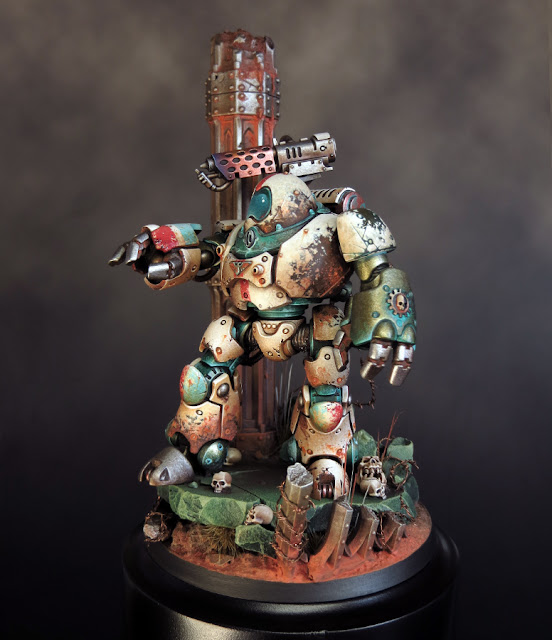 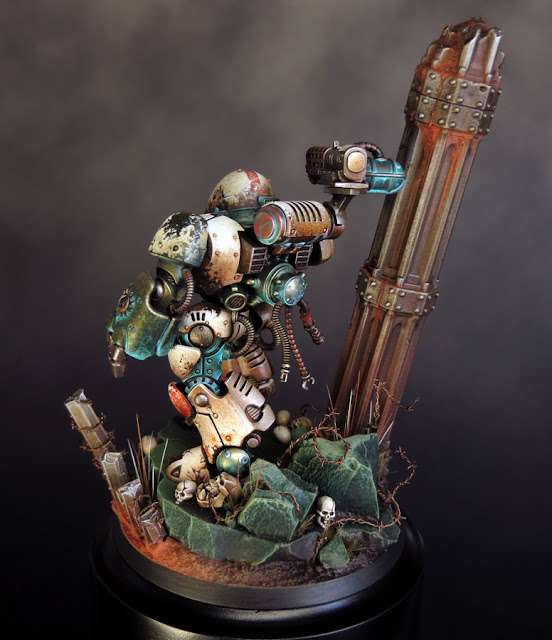 So once again I went over the top with my basing plans and then had to rein my ideas in. This doesn’t bother me too much because I think it’s preferable to tone down an OTT design than it is to have to go the other way.

The finished base feels like the same sort of environment that I tried to create with my first attempt; but it’s now done more simply and I think it’s more effective for it!

At the start of this post I mentioned my new weathering workshop. Sadly the current situation with Covid-19 means that I’ve had to cancel all of my workshop dates this year. I thought very hard about this but with the best will in the world, and as I have asthma, there is no way I could deliver a workshop to the standard I expect while keeping socially distanced.

Hopefully we can all get back to meeting at workshops and competitions some time next year but, in the meantime, let’s keep safe and keep painting!