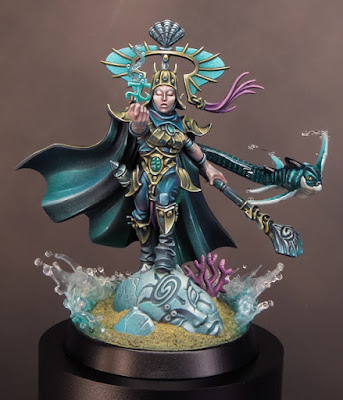 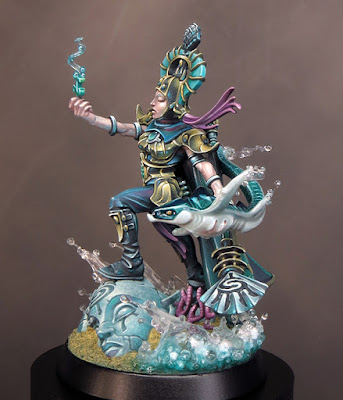 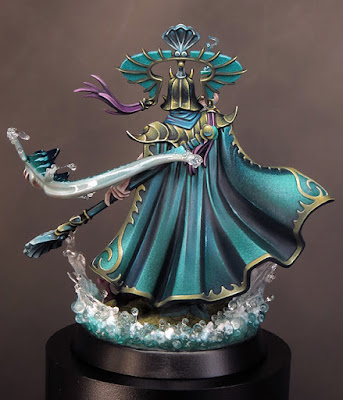 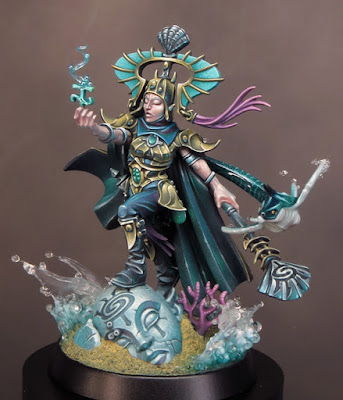 I finished painting my Tidecaster back in July just as Mark began to feel unwell. I didn’t know it at the time but this was the start of the infection that would land him in hospital for a month. Naturally enough I put the Tidecaster away and got on with life. But she has always felt like a little bit of unfinished business. I never had the opportunity to give the mini that final finesse that can often make all the difference. I definitely had the feeling that something was missing from the overall paint scheme but I didn’t have the time to give it my full attention. When Mark came home and I returned to painting I wanted a fresh new project, so I broke out the Sloppity Bilepiper.

But now I have the time, and a very good reason, to take another look at my Tidecaster. When I started painting her it was simply because I liked the mini and that’s always the best reason to paint. But, in the time since I started, the Tidecaster was announced as the chosen miniature for the ‘Eavy Metal Paint Masters category in the 2019 Golden Demon. At that time I didn’t expect to be going to Golden Demon so I was a little disgruntled. However due to Mark’s improving health I am now able to attend and my Tidecaster will be coming with me!

I certainly wasn’t unhappy with what I’d achieved but I had that all too familiar nagging feeling that I could do a bit more. After careful consideration, and the advice of a few fellow painters, I decided to do the following:


This was the single biggest issue and the trickiest change to make. I painted the face first and, as the overall scheme and contrast developed, it became clear that the face was too dark. It just didn’t stand out enough. In addition I felt my painting could be softer and smoother. My initial painting of the face felt a little harsh and I wanted something that would look both more passive and feminine. The Tidecaster is notable for having a very calm face counterpointing an active stance. She even has her eyes closed. I felt that her face should, quite literally be the calm focus at the center of the storm.

I had to go in with some very subtle glazes and soften out the transitions on her face. This was especially fiddly because I was also lightening her face to the point of having almost pure white highlights. In addition I worked a little blue into her jaw line and the space above her eyes. I had to take a couple of passes at all of this but I’m glad I stuck it out. I’m now much happier with my Tidecaster’s face and feel it’s appropriate to the nature of the character, as I perceive it. 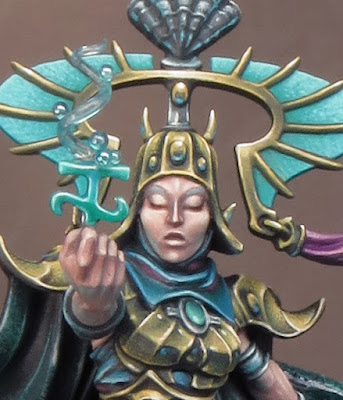 
This had the opposite problem to the face. My initial painting of the coral was too smooth to the point that it looked bland and unfinished. The solution was to add some texture. Rather than just stippling the coral I decided to paint some striated bands. This had the double benefit of adding a texture and increasing contrast. The final effect is quite subtle but I think it somehow brings the coral to life.


This was the subtlest of the changes I made and although it probably makes no great difference I at least know that I’ve refined everything to the best of my ability. I smoothed out some of the highlights on her cloak and sharpened some of the highlights on her armour. Never forget to adjust your painting to reflect the type of material you are trying to represent. Material contrasts are just as important as hue, tone, and saturation! I also added a touch more saturation to the highlights in the gold trim on her cloak. 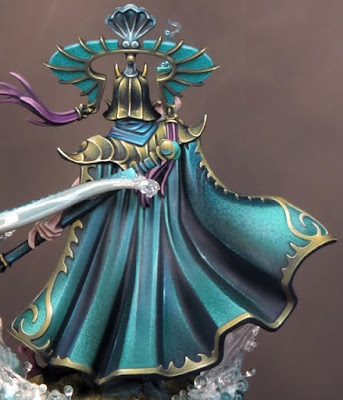 
This was definitely the least subtle of the changes I made! I based the paint scheme for the fish on a striped marlin and, although I liked the colour and pattern, I felt it looked somehow a bit unfinished. Even worse, to my eye, the fish didn’t quite belong with the rest of the mini. The solution I came up with was to make my fish look wet. I’ve had issues with painting aquatic and semi-aquatic animals before and I wasn’t going to be called out for having a dry fish!

Three coats of high gloss varnish have transformed my fish to something that now looks wet and sleek as it glides through the air. I’ve enhanced this with the addition of a few droplets and streamers of water trailing from the tail and fins. These emphasize the movement in the fish but also add a visual link to the base and tie the fish into the same environment as the Tidecaster. 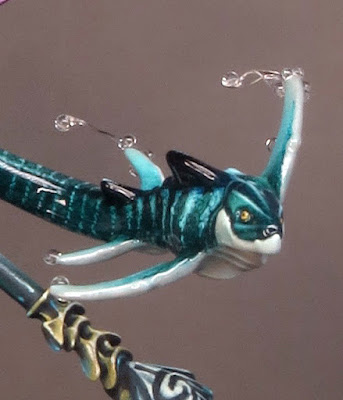 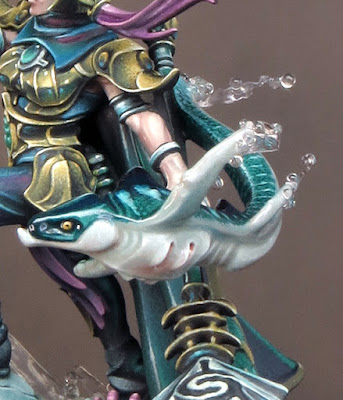 Overall none of the changes I’ve made to my Tidecaster are that major but they do all make a difference. I now feel I’ve done the best job I can on this mini and she’s as ready as she can be for the Golden Demons!
Posted by David Soper