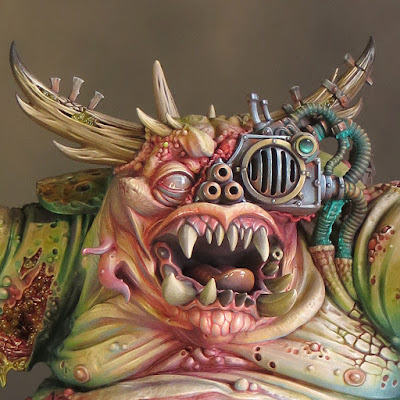 So just when I though I’d be getting back into the swing of things, with a regular painting schedule, life had other ideas! We’d been planning some long-overdue house renovations (by long I mean 20 years!) and had scheduled them in for 2022. However the chance came to get the work done earlier and we took it. As a result our home was in complete upheaval, from October until mid-January, and there was no way on earth I could do any painting. Stressful as the disruption was it’s been great to finally get our bathroom and kitchen sorted and things are now getting back to normal, whatever that is.

The enforced hiatus has given me the opportunity to take stock and realise that I’ve undergone a big shift in attitude towards this project. Up until now I’ve been very focussed on getting the paint scheme for my Daemon Engine up and running. It’s been a sign of my uncertainty that I’ve concentrated on establishing the colours, textures, overall contrast and direction for the scheme but haven’t really looked beyond that.

Over the last month that has changed and I quite suddenly realised that I’ve now painted the bulk (no pun intended) of the flesh on this model. I have no firm idea of how long it will actually take to complete, but it feels like I’ve reached a sort of halfway point in the painting! I’m well aware that much of what remains to be done features fiddly mechanical details but I’ve most definitely moved forward into a new phase of the project.

When I started work on this project, back in February 2019, it was with the final model very much in mind. But as I’ve progressed, and especially since I’ve started painting, my thinking became more wrapped up with the process rather than the end goal. I think this was necessary because I needed to make a lot of decisions about what I was actually going to do with my scheme, but it did overwhelm my thinking.

With some major decisions made (I’m sure there are many more to come!) and considerable progress under my belt, I can now see my way ahead. So much so that I’ve started to work on a base for this model. The end of the project may be some way off but I think it’s a good time to start planning for it. The overall composition of this model and its base will make or break this project so there is no room for a last minute solution! I have plenty of time for planning and preparing a base and I fully intend to use it.

My thoughts on basing the model have greatly evolved over time. I’d thought of something quite large and elaborate, inspired by the type of basing you often see for historical tank kits. Thankfully I saw sense as that would have taken the project into diorama territory. What I now intend is to base the tank as though it were, and in many ways it is, a character model.

I’m not going to say too much about my basing plans until later in the project. But I must say a huge ‘thank you’ to Byron Orde who, through the course of a general discussion about basing, helped me to clarify my ideas. However, Byron went above and beyond that with some significant practical help towards getting this model onto the right base. I don’t like to blow my own trumpet but, with the help I’ve had from Byron, and if I can pull off all my plans, it’s going to be epic!

But all of that is in the future and for the moment I need to crack on with painting. I will go into more detail in my next posting but for the time being I will bring things up-to-date with a summary.

Back in October I painted the large horns on the Daemon’s head. This was straightforward but very fiddly. I then moved onto the mechanical left hand and arm. I’d made a good start on these when everything ground to a halt. 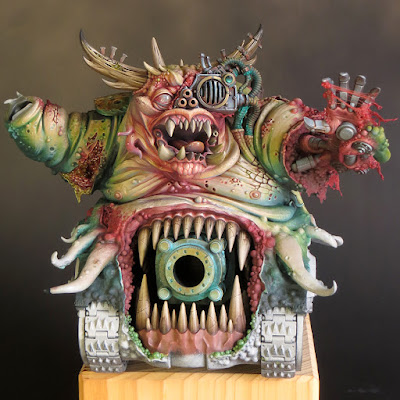 At the end of February I was able to pick up my brushes again but decided not to go straight back to the hand. I decided to paint a sub-assembly to help me get back into the swing of things. For this I chose to paint the large chimney which I first had to detach from the model! This was not a fun job but well worth the bother as the chimney was much easier to paint as a separate element. 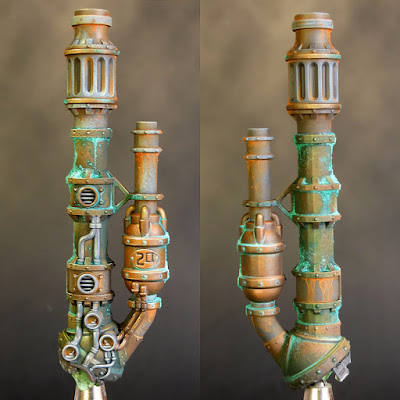 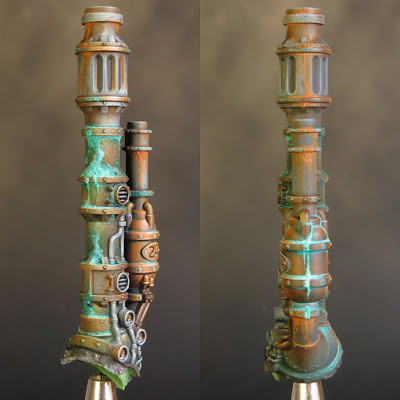 With the chimney painted, I’ve now returned to painting the mechanical hand and arm. 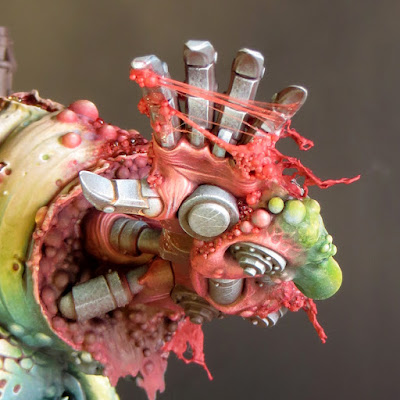 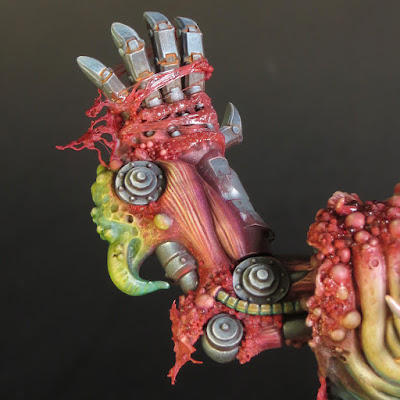