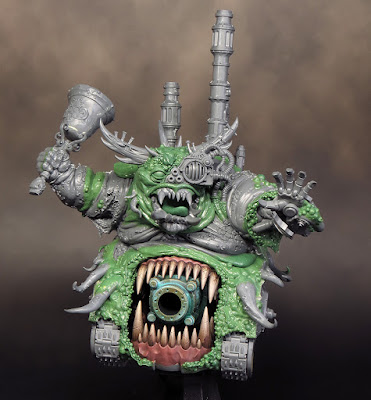 So here we are in 2021 and let’s all hope it’s a better year than 2020! For the last few months I’ve been very quiet with regards to painting sculpting and being online because I simply wasn’t ‘in the mood’. That’s not to say I was down or depressed but rather my energy and enthusiasm were directed elsewhere. I rediscovered my love for Lego and spent a lot of my time building a version of Hogwarts Castle to sit on the top shelf of my desk. I didn’t especially need a new hobby but lockdown seemed like a good time to start one. 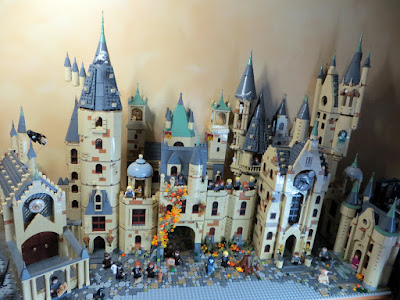 I chose a crazy time to put my tank onto the back burner because I was on the verge of completing the construction/sculpting phase. However, I think this pause proved to be an unexpectedly good thing because this was exactly the right time to stop and think. Not that I haven’t spent an awful lot of time thinking about this model already, but this was different. 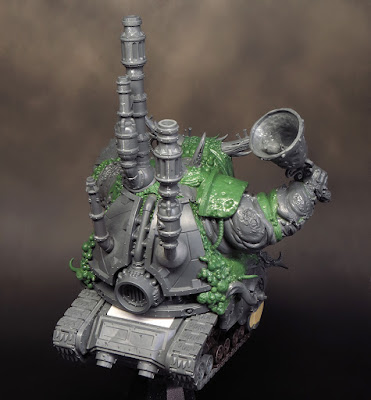 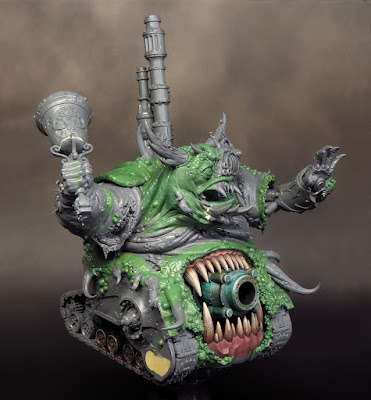 Up to this point my design for the tank had existed as an idea but not a completed three-dimensional object. But now I was able to have the entire model in my hands and, as a result, my plans began to evolve.

With the addition of the long awaited chimneys I finally had the overall composition fixed. This meant that I was able to consider all the elements of the model in context. I quickly decided to adjust the angle of the arm swinging the bell. By doing this I was able to raise the bell up. It was a relatively simple change but it opens up the overall composition and makes the pose look more active. After all, if your model is ringing a dirty great bell you want it to look like its giving it some welly! 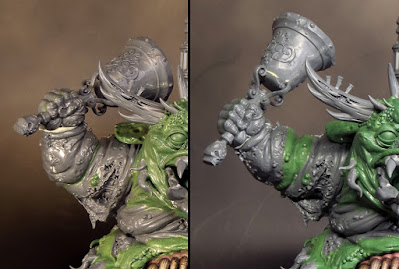 My idea had been to paint an updated version of my 1990 Nurgle Predator’s paint scheme. It would consist of a stippled green flesh tone with metallic details. However, I began to feel that this would not be enough. Regardless of how well I painted the model I think it would look very basic in the 1990 scheme.

Miniature painting has come a long way since 1990 and I need to reflect that in my new paint scheme. I want to create a scheme with more drama and contrast than the old one. The new scheme will reflect the range of materials and surfaces present on the model and most especially the transitions between machine and flesh. These areas will be treated differently in terms of colour and texture and the transitions between them should help to tell the story of a Demon engine manifesting itself as flesh.

The next step was to create an initial colour palette. Things will probably change as the project progresses but I need a starting point. The colours in my palette need to fulfil the following roles:
Base colour,
Shade,
Highlight,
Mid-tones,
Spot colours,
Nuance colours,
Metallic colours,
Neutrals.

Bearing all of this in mind I began by lining up the colours I thought I might use. I then set about testing different combinations in my notebook. You can see my test swatches in the photo below. The first is at the bottom and they progress up the page. 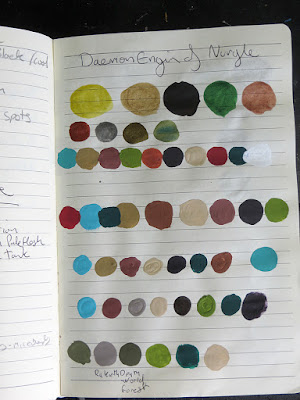 As you can see, it was during this process that I moved away from my mostly green 1990 colour palette. My new palette gradually became more varied and saturated as my ideas developed. I’ve decided to create a much paler flesh tone than I’d initially planned and graduate this into a dark (almost black) colour on the tank parts. I will also use a cooler palette of greens than I did on my old tank. The overall colour palette will have a lot more variety than my 1990 one but this is a large model and it can take it.

The next step was to paint a full-page colour swatch to see all my colours together. My initial reaction was to realize how similar this scheme looks to the one I used on Gutrot Spume. However this is a misleading impression. It doesn’t reflect the intended paint scheme in terms of the relative proportions of the colours or how the colours will mix together. Many of the subtler relationships between the colours will have to be resolved during painting. I think my colour selection will give me a good starting point to work from but it’s important to be flexible! 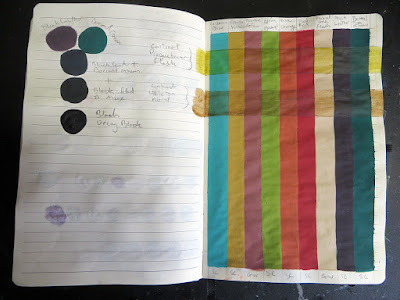 My tank is now in the final stages of preparation for painting. I’ve photographed it for lighting reference. Washed it to remove any dust and grease, left over from its construction, and mounted it onto a painting handle. The final bit of preparation is to give it a light spraying of primer.

Then, finally, I will begin painting the tank!